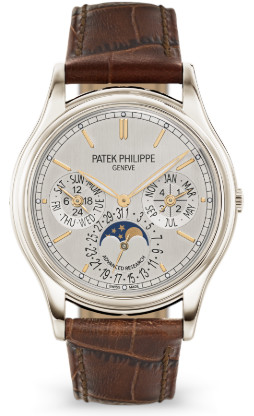 Patek Philippe's 2011 Perpetual Calendar Ref. 5550 was one of the first wristwatches with a silicon balance wheel. It is the fourth member of their Advanced Research project.

In the 2000s, Patek Philippe set up an Advanced Research project to address the long-standing issues of isochronism and durability in watches. The main technology applied to this task was a proprietary alloy of silicon known as “Silinvar”. The company proceeded steadily, producing first a Silinvar escape wheel, then a hairspring, an anchor, and a balance.

Ref. 5550 was the fourth Advanced Research watch, introduced in 2011, and the first with a perpetual calendar. Cal. 240 Q Si included the Silinvar “Pulsomax” escapement of its predecessor, this time in the company's fine micro-rotor automatic movement. It also added a novel Silinvar version of the company's traditional Gyromax balance wheel with a 24 karat gold rim and four gold poising screws called GyromaxSi. This made it one of the first watches ever produced with a silicon balance and escapement. The display caseback included a large “cyclops” magnifier to allow the owner to inspect these high-technology components.

Although it used these high-tech components, Ref. 5550 was nevertheless a Patek Philippe. It included their traditional perpetual calendar mechanism with day/24 hour indicator and month/leap year indicator subdials inset at 9 00 and 3 00, and a date and moon phase subdial at 6 00. The silver dial features simple applied gold markers at all hours but 6, and a “railroad” seconds track. The hour and minute hands were leaf shaped and featured lume. It had a traditional Patek Philippe platinum case, with long integrated lugs.