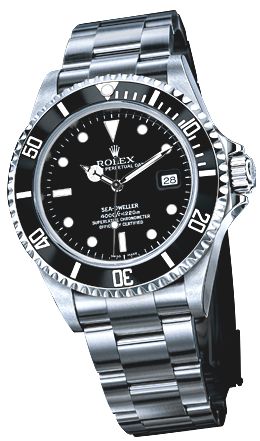 The Sea-Dweller is a specialty dive watch produced by Rolex since 1967 as a companion to the Rolex Submariner.

Rolex produced their first dive watches in 1953, and the Submariner line had become a cultural icon in the 1960s. Throughout that decade, Rolex had been experimenting with watches that could go ever-deeper, and this was the start of the Sea-Dweller line. Although not all the prototypes of this line had a helium escape valve, this would become a signature element of all production Sea-Dweller watches.

The first commercial Sea-Dweller watch appeared in 1967. Reference 1665 has become known as the “double red” Sea Dweller (DRSD) because it featured two lines of red text on the dial “Sea Dweller / Submariner 2000”. This marked it firmly part of the Submariner family, but the Sea-Dweller was something else entirely with 2,000 ft (660 meter) depth capability. The 40 mm case was similar to the Submariner but added a helium escape valve at 9 00 and lacked the “cyclops” magnifier over the date. The crystal was thick, domed plexiglass. Ref. 1665 would remain in production until 1983, with a change to white text in 1977.

Rolex updated the Sea-Dweller in 1978 with a sapphire crystal and bigger case. The resulting Ref. 16660 was now capable of 4,000 ft (1200 meter) depths thanks to this sturdier build and a larger helium escape valve. It uses the high-beat Cal. 3035 for better accuracy and, critically, a quickset date wheel. Early “triple 6” Sea-Dwellers feature a matte dial but later examples have the glossier dial of modern models.

The Sea-Dweller was again updated in 1989 with an improved movement, Cal. 3135. The lume paint used changed from tritium to Luminova to Super Luminova during this model's production, which ended in 2009.

In 2008, Rolex launched a new model with even greater capabilities, the Deepsea. While still marketed as part of the Sea-Dweller line, the Deepsea has an even larger 44 mm case with a titanium caseback, a 5 mm thick sapphire crystal held in place by Rolex's “Ring Lock System”, and a tough Cerachrom bezel. New Chromalight lume makes the markers even brighter. As implied by the name, the Deepsea can survive up to 12,800 ft (3,900 meters) under water. It remains in production today, with the special James Cameron D-Blue edition getting special attention from collectors.

The regular Sea-Dweller was re-launched in 2014 after five years off the market as Ref. 116600. It also features the Cerachrom bezel but keeps the traditional case dimensions of 40 mm diameter. It retained the earlier thin lug profile, even as the Submariner was enlarged to “Supercase” dimensions. The dial has “Maxi” enlarged markers and all 60 minutes are marked on the bezel, as opposed to the traditional 15 minutes of the Submariner. This reference was retired in 2017, a surprisingly short-lived run.

The present Sea-Dweller was launched in 2017. Ref. 126600 has a larger 43 mm case, though still 1 mm shy of the Deepsea. The dial hews to tradition with a single red “Sea-Dweller” line, but the most remarked-on difference is the appearance of a “cyclops” magnifier over the date for the first time. The new Cal. 3235 has a longer power reserve and magnetic resistance. The following year, 2018, the Deepsea model was also updated with this new movement as Ref. 126660. In 2019, Rolex celebrated the 60th anniversary of the first Deep-Sea Special models with a Rolesor version of the Ref. 126600 Sea-Dweller known as the “Single-Gold”.