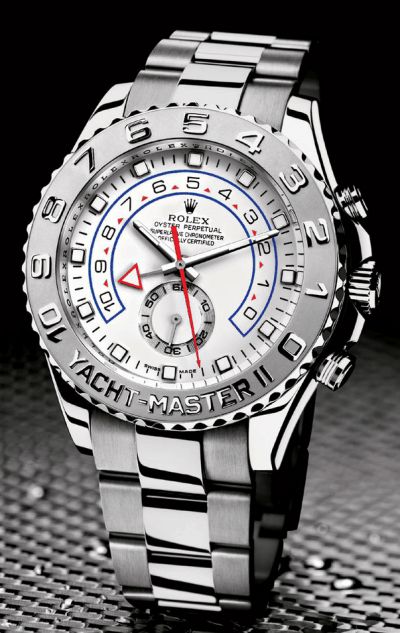 Rolex Yacht-Master II is a Regatta chronograph by Rolex.

At the Baselworld 2007 Rolex unveiled this new wristwatch model. It has a countdown counter with a maximum of ten minutes and with mechanical memory function using the new “Ring Command” bezel. At reset, the counter resets to the preset time. This is an unusual model for Rolex in that it features a complication, though the movement is similar to the chronograph movement found in the Daytona.

The Yacht-Master II is powered by the newly and specifically for this purpose developed manufacture Calibre Rolex 4160. This self-winding movement consists of 360 components and has a power reserve of 72 hours. Each Yacht-Master II has a chronometer certification by COSC. The Yacht-Master II received an updated movement, Rolex 4161, in 2013.

The original 2007 Yacht-Master II was released only in yellow and white gold. In 2011, a two-tone Rolesor steel and Everose gold version was released, with an all-steel version following in 2013. All Yacht-Master II references received the new Rolex 4161 movement that same year, though all models retain the same reference numbers.

In 2017, Rolex updated the dial of the Yacht-Master II with a triangular marker at 12 00 and a rectangular marker at 6 00. These versions also feature new hands, and are marked “-0002” after the reference number.