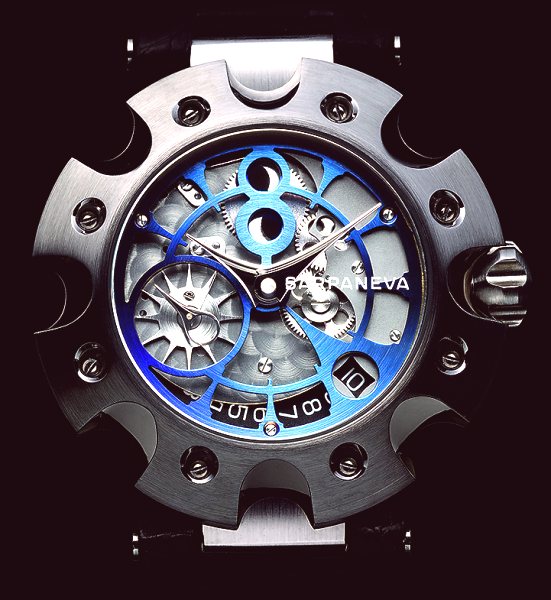 Stepan Sarpaneva was born in Turku in Finland in 1970. His family has a long tradition of craftsmanship. His father was the jewelry designer Pentti Sarpaneva and his uncle was designer and professor Timo Sarpaneva.

In 1994, he started working for well-known watch makers such as Piaget, Parmigiani, Vianney Halter and Christophe Claret. During his ten-year stay in Switzerland, he specialized in the creation of complicated timepieces.

In 2003, he opened up a workshop and founded his own watch company named after himself in the old cable factory (Kaapelitehdas) in Helsinki, where he personally handcrafts each watch individually. The luxury watches he creates for Sarpaneva Watches are characterized by a completely unique and unusual design, and obviously made in very limited quantities.

In 2004, he founded a second watch brand named SarpanevaUhrenFabrik, or S.U.F Helsinki. This Finnish watch brand represents the grit and determination known as “sisu” in the local language, which is characteristic of the Finnish people and is said to come from the long, bleak winters and traditionally limited resources of Finland.

Stepan calls it a workmanlike alternative to his finely crafted, nouveau-Gothic Sarpaneva timepieces. Thus, the S.U.F watches are inspired by Finnish icons, pioneers and history, such as the legendary WWII submarine Vetehinen and famous motorcyclist Jarno “Paroni” Saarinen. They are produced in slightly larger quantities and varieties than those under his namesake, as well as being more affordable.

In 2018, he got a lot of attention for creating Sarpaneva Lunations, to mark his fifteen year anniversary. It is a moon phase watch with an extremely precise caliber called Sarpaneva Moonment®. It accurately tracks the phases of the moon and only needs to be adjusted for a single day of error once every 14,000 years.

Sarpaneva received the Red Dot Design Award in 2009 for the Korona K3 Black Moon model. He also received two GOOD DESIGN awards from the Chicago Athenaeum Museum of Architecture and Design at the end of 2009.