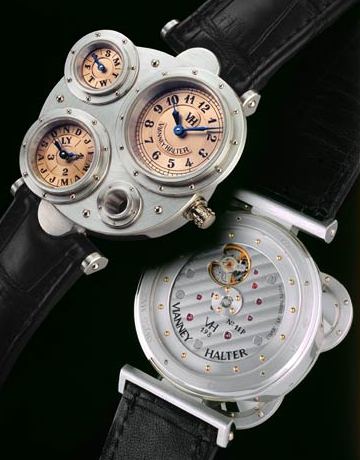 Vianney Halter is a Swiss watchmaker and watch manufacturer.

Vianney Halter is one of those innovators of late, who clean up radically with the recent watch tradition.

From 1983 in his studio in Paris he had restored valuable antique watches from 1550 to the 1980s and thereby gained a profound knowledge. In 1990 François-Paul Journe invited him to a collaboration, during which he developed watches for important brands such as Breguet, Audemars Piguet, Mauboussin, Jaquet Droz and Franck Muller. 1994 he founded in Sainte-Croix the Manufacture Janvier SA. This name comes from one of the most capable watchmakers in watch history Antide Janvier (1751-1835).

In 1998 Vianney Halter, within the framework of his candidacy for AHCI, presented his first watch creations, supported by Philippe Dufour. His best-known model is the Antiqua with its three dials a perpetual calendar with a self-constructed, patented self-winding movement, whose production per copy takes about 900 hours to complete. Other models are called Classic, Trio, Classic Janvier and Contemporaine.

Like Fabrice Gonet from HD3 Complication also Vianney Halter is inspired by Jules Verne and his mysterious hero Captain Nemo at the design of his creations.