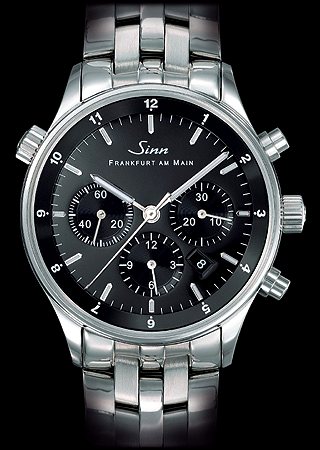 The 6030 Frankfurt Financial District Watch IV is an automatic chronograph produced by Sinn from 2007 through 2015. It is the fourth model in the Sinn Frankfurt Financial District line and one of a trio of smaller 34 mm watches introduced that year. It is the second chronograph model in the line and the first without a GMT hand.

This Model 6030 was part of a trio of smaller 34 mm watches that joined the lineup in 2007. The 6030 “IV” chronograph and 6033 "V" three-hand watch were introduced early in the year, neither of which featured the GMT hand that had defined the “Frankfurter” family from the start. Sinn simply did not have a suitably-small GMT movement. It was almost 2008 before Sinn introduced the Model 6036 "VI" World Time.

Unlike Models 6033 and 6036, which used a crown at 2 00 for the rotating inner bezel and moved the winding crown to 4 00, Model 6030 had the traditional “Frankfurter” layout. A crown at 10 00 rotates the inner second timezone bezel, with chronograph pushers and winding crown in the traditional 2-3-4 locations.

Most Sinn chronographs used the Valjoux 7750 or Lemania 5100 which located the chronograph registers and small seconds at 6, 9, and 12. But Model 6030 used the ETA 2094 with a 3-6-9 subdial arrangement like the original Model 6000. This is one of the reasons for a strong family resemblance among all these models. The movement, visible through a sapphire display caseback, features a “bull and bear” motif.