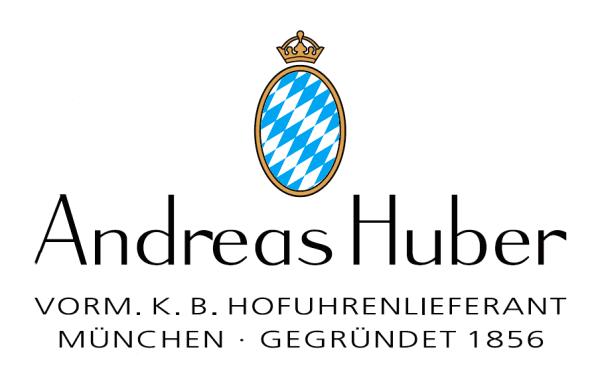 Andreas Huber was a Munich watch shop and a watch manufacturer, named after the founder and after his grandson of the same name.

On October 13, 1856 Andreas Huber founded, after he had just received a legacy of 3,000 florins, with this money a watch shop in Munich in the Roeckl house on Karlsplatz (Stachus) number four. The day before, he had married his childhood sweetheart, Xaviera, which is in the following years becomes an indispensable employee of his company. Because she skilfully builds new business relationships to the major clientele of nobility and upper classes. The Bavarian royal family is aware of the company Huber. King Ludwig II. orders precious ceremonial watches in heavy French bronze watch cases. 1912 the title “Hofuhrenfabrik” (official watch factory of the court) is given to the company by the Bavarian prince regent, and so till today they may be called “Ehem. Königlich Bayerischer Hofuhrmacher” (Former Royal Bavarian Court Clockmaker).

In Munich vernacular is always spoken of “Uhren Huber”. In second generation the company is passed to Joseph Huber, who introduces the first pocket alarm clock in Germany and also has many great business plans, even abroad, for it is 'Gründerzeit' (years of rapid industrial expansion in Germany around 1900) and everywhere the fever of success is rampant. Joseph Huber devises a new sales and sales system to sell watches in the army and to officers. After a short time Huber watches belong to the most popular in these customer groups.

Between 1913 and 1920 Huber stores are opened in Berlin, Düsseldorf and Nuremberg. Joseph Huber dreams of further major expansion plans, but when he passes the company to his son Andreas Huber II in 1920, he must soberly realize that it is entirely indebted. The young chief is of a much different calibre than his father rather sensitive, art-minded and culturally interested. He establishes contact with artists, writers and musicians. He also restores the company and brings it back on track. Huber watches are also sold under its own brand Urania. 1921 season of year watches for trams and buses are developed and produced by Huber. Huber introduces in Berlin the first radio time announcement of Germany. He specializes in stop-watches and measuring instruments for car racing. In addition, complicated measuring instruments for international expeditions are made. 1936 Huber receives the order to carry out the timekeeping at the Olympic Winter Games in Garmisch-Partenkirchen.

In the year of the war 1944 all work departments and businesses Hubers are destroyed. But again in the year 1946 in the center of Munich three shops are opened. The new head office in the Residenzstraße is put into operation in 1950.

When Andrew II dies in 1966, Martin Huber, at the age of only 25 years and with the support of the mother, takes the lead of the company in fourth generation. He leads the firm to the threshold of the millennium. He has always remained faithful following the tradition to always have at least one separate “Huber Watch” on sale. Martin Huber also makes himself a reputation as watch author with standard works on Patek Philippe and A. Lange & Söhne.

Today there are three branches, all of which are in the shopping areas of the city center of Munich. In September, 2002 the company is sold to the Swiss watchmaker Bucherer.

The son of the first wife of Martin Huber from their previous marriage, Ashley Pace, continues the watch enthusiasm of the family in the fifth generation. After having worked as managing director at Andreas Huber, he opens the luxury watch store Ashleys, also in Munich City, between Hofbräuhaus and Maximilianstraße.