A. Lange & Söhne is a luxury watch manufacturer in Glashütte, Germany, currently one of the Specialist Watchmakers of Richemont.

Foundation: Glashütte and F. A. Lange

Ferdinand Adolph Lange (1815-1875), founder of the watch-and-clock-making industry in Glashütte
© A. Lange & Söhne

As the industry of silver mining in Glashütte dried up, the inhabitants turned to the Saxony state government with the urgent request for support. Ferdinand Adolph Lange created the first watchmaking jobs in Glashütte with the help of a state loan on 7 December 1845, starting a clock company. He brought on 15 apprentices and hoped to create further jobs in the new field of watchmaking. The company began in a notable mansard-roofed mansion in Glashütte that has returned to company ownership today.1) Together with his brother-in-law, the master watchmaker Adolf Schneider, and the 15 apprentices, the history of precision watch production in Glashütte began. Shortly after, the first watch with the dial label “A. Lange, Dresden” left the workshop.

The initiative of Lange and the labor of his employees firmly established this new industry in the region. In the following decades, shops, businesses, and suppliers were created and the manufacturing of watches in Glashütte gradually earned its reputation. Ferdinand Adolph Lange, therefore, deserves the credit for giving the impetus to let Glashütte compete with established Swiss producers and to become a center of German high-end watchmaking.

Lange also contributed significantly to the craft of watchmaking. He invented completely new precision tools, measuring instruments, and manufacturing methods. In 1846 he replaced the hand bow with flywheels and lathes to bring significant improvement in the quality of machining parts. In 1864 he introduced the three-quarter plate (“Dreiviertelplatine”), which has become typical for Glashütte watches and added tremendous durability. The switch from Paris-ligne measure to the metric system should also be mentioned as a Lange innovation in Germany.

In addition to his work in the manufacturing of watches, Lange also became the mayor of Glashütte and occupied this position for 18 years, from 1848 to 1866.

When Ferdinand Adolph Lange died in 1875, his sons Richard and Emil took over leadership of the firm, which was re-christened A. Lange & Söhne. A third son, Adolf, later joined as company clerk. Under their leadership, numerous technical improvements were introduced and the company and region continued to build its reputation, becoming the timepiece of choice for Emperors and Sultans alike.

Some notable pieces from the first heyday of A. Lange & Söhne include a pocket watch commissioned in 1898 by Emperor Wilhelm II for Sultan Abdul Hamid II, the Centennial Tourbillon, created in 1900 by Emil Lange, and No. 42500, “The Grande Complication”, created in 1902 and still the most complicated watch ever produced by the company.

During World War II, Lange produced watches for the German military. The factory was able to continue until the last day of the war, when the factory was bombed on May 8, 1945.

On April 20, 1948, A. Lange & Söhne was expropriated by the new communist government of East Germany and renamed VEB Mechanics A. Lange & Söhne. With the merger of other expropriated watch holdings, Urofa, UFAG, Otto Estler and the precision mechanics companies Lindig & Wolf, R. Mühle and Gössel & Co, the company was soon renamed Glashütter Uhrenbetriebe (GUB). At this point, the A. Lange & Söhne brand disappeared from watch dials, although the firm continued and production expanded.

The Lange 1, the first big success after the restart
© A. Lange & Söhne

145 years to the day after the founding of the original Lange company in Glashütte, the great-grandson of Ferdinand Adolph Lange, Walter Lange, reclaimed the heritage of his family. On December 7, 1990, he founded Lange Uhren GmbH as a successor to, and continuation of, the company.

The next year, under the leadership of Günter Blümlein, LMH (owner of IWC and other watchmakers) invested in the firm, allowing the relaunch of the brand. The name, “A. Lange & Söhne”, was registered worldwide and the design of a new line of watches began.

Although the old headquarters building was not available for purchase, Lange acquired the former premises of the precision pendulum watch factory Strasser & Rohde in July 1992. In 1993, the factory was rebuilt, modernized, and expanded, and production was relocated from the rented neighboring building to this new headquarters.

On October 24, 1994 A. Lange & Söhne introduced its first creations The innovative Lange 1, Arcade, Saxonia and the tourbillon "Pour le Mérite". Due to the iconic dial design and quality factory movement, the Lange 1 is an immediate success; it is elected Watch of the Year in 1995 and 1997 and becomes one of the decade's most-acclaimed watches.

In 1997 Lange presented the Langematik, driven by the newly-developed automatic calibre SAX-O-MAT, which is equipped with a hacking seconds device with automatic zeroing of the seconds hand while pulling the crown. This high-class watch received the maximum 6 stars in a test by the German watch magazine Chronos. In 1999 Lange introduced a very special chronograph the Datograph, which unites the flyback function with a big date and a column-wheel.

In 2000 the company repurchased their original headquarters, and it is solemnly reopened 2001. Since 2001 the company, in addition to major watch manufacturers such as IWC, Jaeger-LeCoultre, Vacheron Constantin, Cartier, Piaget and Baume & Mercier, belongs to the Swiss luxury goods group Richemont based in Geneva. 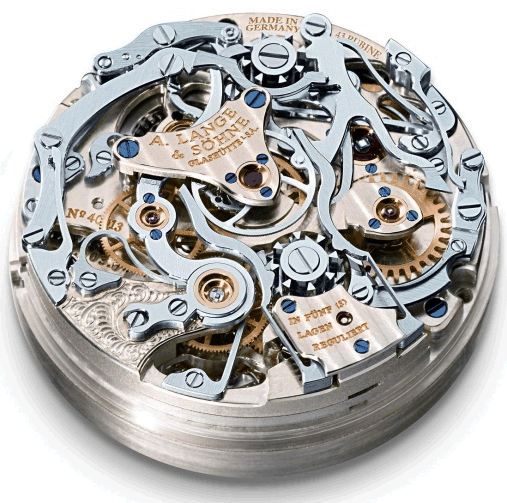 The Pinnacle of Watchmaking

On December 7, 2005, the 15-year anniversary of the re-establishment of A. Lange & Söhne, the company introduced the Tourbograph "Pour le Mérite", a watch of superlatives. This grand complication piece demonstrates the watchmaking skill and finishing brilliance of the reborn company. The production of this model is so cumbersome that it needs about a month only to produce one copy.

Later models introduced by A. Lange & Söhne include the 2007 Lange 31, named to reflect a hitherto unimaginable power reserve of 31 days. The Zeitwerk, introduced at SIHH in 2009 with its digital display reflecting the “big date” of the Lange 1.

The traditional Glashütte manufacture is now considered to be one of the best manufacturers of precision watches in the world. Most industry experts would place Lange at the “top of the pyramid” among luxury watchmakers along with Patek Philippe, Vacheron Constantin, and Audemars Piguet. Notable aspects of Lange today include the fact that they are one of the few companies to produce every component of their watches, including springs. Another unique feature of Lange is the procedure of first and second mounting Before final assembly, the movement is disassembled completely and cleaned to make it absolutely dust- and scratch-free. This great care illustrates Lange's reputation for perfection of the watchmaking craft.

Calibres by A. Lange & Söhne

A. Lange & Söhne is known as much for their high-quality in-house movements as for their finely finished watches. The names of Lange movements usually contain two digits for the year of their introduction, one digit for the numbered position of the movement in the series of movements developed in that year, and one decimal for their position in the family of that movement, counted from 0 (basic caliber). For example:

2)
If not specified: manual winding.