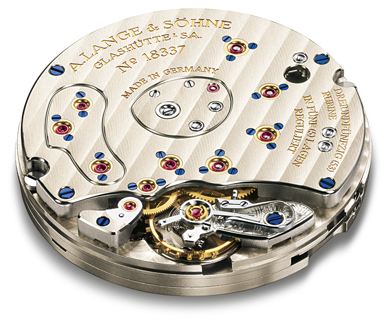 A three-quarter plate (also ¾ plate) is a large top plate that covers roughly three quarters of the movement and is a historic signature of watchmakers in the Glashütte region of Germany.

Around 1864 Ferdinand Adolph Lange developed the legendary classical three-quarter plate caliber in Glashütte for pocket watches. The top plate covers about three-quarters of the movement, as seen from the reverse side of the dial. The barrel, crown wheel and the whole gear train are located under this large plate, complicating construction but increasing durability and stability. The bearing of the balance wheel and the anchor are exposed outside the plate and secured with a cock or bridge. To facilitate construction, the wheels and jewels are anchored using gold chatons that are attached after the plates are brought together.

Today the three-quarter plate is considered as special mark for quality Glashütte watches, but it is also commonly found in British and American pocket watches. Plates in Glashütte are traditionally made of untreated German silver and decorated with Glashütte ribbing. Compared to designs with several bridges, the three-quarter plate gives the movement significantly more stability. However, in watches with display casebacks, the large plate obscures much of the movement from view.