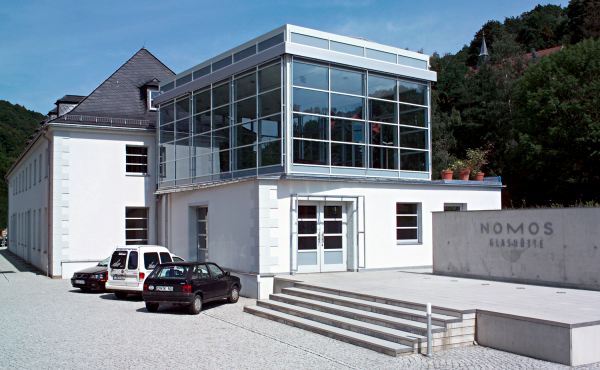 Nomos Glashütte/Sa. is a German watch manufacturer in Glashütte, one of the few remaining independent brands..

On 1 January 1991 the old traditional name “Nomos” is revived by Roland Schwertner from Düsseldorf, a former computer expert. He founds the company Nomos Glashütte/SA Roland Schwertner KG. The name “Nomos” had already existed previously in Glashütte, namely in the form of the Nomos-Uhr-Gesellschaft, Guido Müller & Co, Glashütte i/S. This company had to close at that time because their watches were made ​​entirely in Switzerland and the inscription “Glashütte” therefore was not justified.1) Also Schwertner had to fight for the name “Nomos Glashütte / Sa.” (i.e. Glashütte, Saxony) in court shortly after its launch, after a warning of the Centre for Protection Against Unfair Competition.2) However, he could prove that most of the value creation of his production happens at Glashütte.

Success with the 'Tangente' 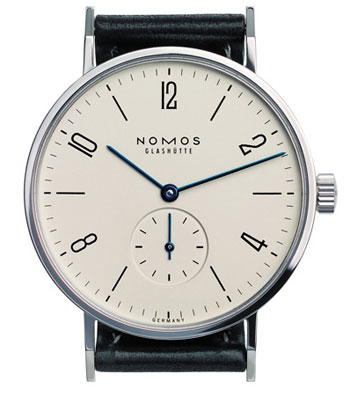 The launch of the new Nomos is under a lucky star, because the reputation and the sales success of the new company grows fast. This is mainly due to their new model Tangente which will soon become a real classic of the modern watch. The appearance of the watch has been influenced in a decisive way by the designer Susanne Gunther. The design is very consistent in every detail and is given several design awards.

In the leaflet of 1991 the first new collections can be found Orion, Tangente, Ludwig and Tetra. More recently, the models Tangomat and Club are added. The bracelets of the Nomos watches are made of shell cordovan, a horse-leather, which is very robust and due to the high proportion of body fat is relatively hydrophobic (shell cordovan is otherwise used primarily for high-quality footwear).

1997 the mail order company Manufactum, which represents a similar set of principles such as authenticity and solid craftsmanship, participates in Nomos. With this enhancement it is possible to pursue the ambitious project of the development of an own in-house produced movement. In addition, the Nomos watches are now also offered by Manufactum, both in shipping and in the branches, and thus reach a wide audience.

As of 1 November 2003 Nomes buys back the 37.5% share of Manufactum and is now completely independent.

Movements From Peseux 7001 To Nomos 1

From 1992 through early 2005, Nomos used Swiss ETA or Peseux ebauche movements. The movements are based on the Peseux 7001, though with some finishing done in Glashütte style by Soprod Solar grinding on the crown and barrel wheels, “Glashütter Streifenschliff” (Côtes de Genève) on the bridges, and blued screws. The plates are also rhodinated to become resistant to oxidation and later blasted and gilded.

Due to these changes, ETA requested that Nomos not use their name on the movement as early as 1997, so Nomos began re-working the calibres. In March, 2002, the company gave this modified calibre a name other than “Peseux 7001” Nomos 1 T. This replaced the plate and balance cock of the Peseux with gold plated pieces decorated with Langeleist perlage at the Nomos facility. Regulation was now done using Triovis fine regulation adjustable in four positions, thus the “T” in the name. The next major shift was the introduction of the Nomos 1 TSP and its descendants, which feature Glashütte style three-quarter places and a ratchet to lock the barrel wheel. 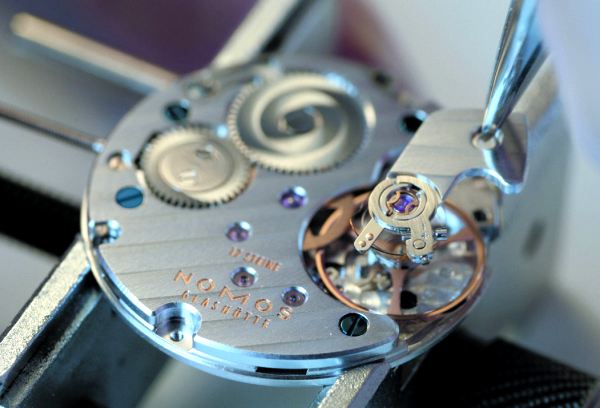 In the year 2005 with the Tangomat comes the first watch with in-house movement, first as test model, then officially on sale. The self-winding movement had been constructed by 29-year old Mirko Heyne. At the same time, also the Nomos manual winding movements are converted to domestic production. A good 80 percent of the labor at the movement is now exclusively made in Glashütte. Since then the company can therefore justifiably count itself to the genuine manufactures.

The watches are optionally available with steel caseback or with scratch-resistant sapphire crystal caseback. Nomos keeps a register of all movements, beginning with the No 1.

The Nomos Alpha and Epsilon movements, introduced in 2005, became the basis for a new family of in-house movements. Although they retain the basic Peseux 7001 design of the Nomos 1 series, they no longer share any major parts. This movement series still uses a Nivarox balance and hairspring, but all other parts are made in Glashütte or by close suppliers. The plates are now Rhodium plated, making it simple to distinguish the new generation from older Peseux ebauche movements.

Also in 2005 Nomos relocates to the Glashütte railway station, which already had been bought in 2000, as a newly renovated location for major manufacturing and administration.

That same year, the book NOMOS Glashütte - Das große Universallexikon is presented, a richly illustrated volume, which contains not only a lot of information about Nomos, mechanical watches and the town of Glashütte, but also comes up with several intriguing and amusing stories. To get a taste, here comes as sample the following original quote “In this book can be found climate tables and discussions of clouds which sometimes pass over NOMOS, as well as Glashütte trade secrets (which are now no more).”

An interesting parallel to the aforementioned dispute over genuine value creation in Glashütte (also called Glashütte Rule) occurs when Nomos, with similar reasons, brings an action against the company Mühle in Glashütte and wins the case in court in 2007. Mühle thereupon gets into trouble and must provisionally declare insolvency.3) 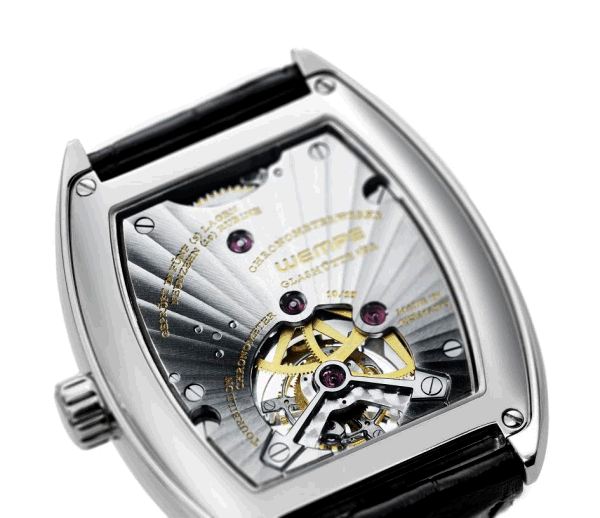 Also in 2006 in collaboration with Wempe new watches of the top class are created, made ​​by Nomos and certified as chronometers by the Sternwarte Glashütte (Observatory), belonging to the Wempe Chronometerwerke 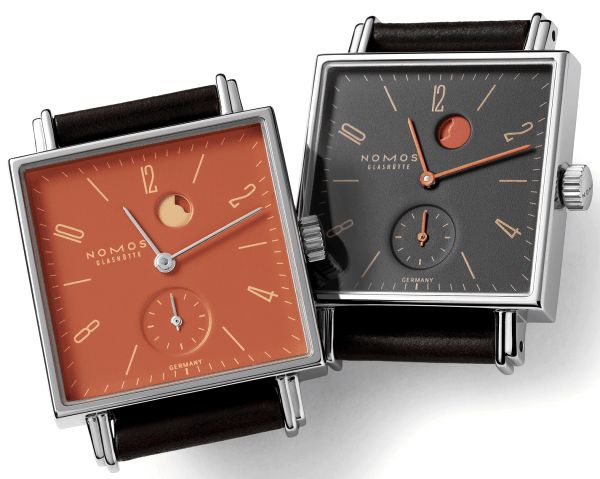 In 1992 Nomos had three employees, in the year 2008 there are 77 employees (including 40 women) with an average age of just 34 years - these figures speak on their own. The company exports to Australia, China, Finland, France, Great Britain, Hong Kong, Italy, Japan, Canada, Luxembourg, Netherlands, Austria, Poland, Portugal, Russia, Sweden, Switzerland, Singapore, Spain, South Korea, Taiwan, Hungary and the USA.

One continues with the same proven strategy watches with high quality and at surprisingly low costs, with the manufacturing expertise of a largely autonomous manufacture and a consistently objective, distinctive design. After the development of their own automatic calibre, a tourbillon and a new manual winding calibre in tonneau form, one invests into the exploration and development of further technologies.

2007 the new model Club enters the market. In 2008 nomos introduces a new, second automatic watch and extends the Club series to the models Club Date, Club Automatic and Club Automatic Date. In addition, innovative special editions address to the passion of watch collectors and are often sold out very quickly.

The Zürich --- a lucky strike

The cooperation between Nomos and the well-known Zurich watch designer Hannes Wettstein turns out to be a lucky strike. Wettstein once again delivers a brilliant creation with his last watch design, the Nomos Zürich. Seemingly derived from the Orion without numerals, its design has much more than this and bears the potential to become a true modern classic. A declaration of love for this 2009 presented watch and more accurate data can be found in the Wiki article about the Zürich.

In 2011 the World Time Calibre Xi with automatic movement is created. It is built into new models Zürich Weltzeit, Tangomat GMT and Tangomat GMT Plus. These share the Nomos Epsilon architecture but add a novel complication. In March 2012 the Tangomat GMT is elected Watch of the Year (Uhr des Jahres).

In keeping with their independent spirit, Nomos presents “Deutsche Uhrenwerke NOMOS Glashütte” in 2013, a new line of calibres with even greater in-house content and finer finish work. The 2014 launch of the Nomos Swing System markes another major advance The entire assortment is now manufactured in-house. 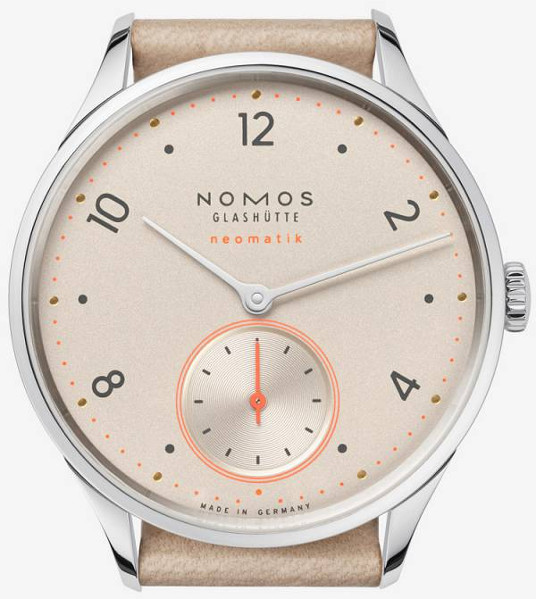 In 2015, together with the series “neomatik”, the new extra flat automatic movement DUW 3001 is introduced. As a start, there is already a sum of 10 new models, three of which are known (Tangente, Ludwig, and Orion) and two new (Metro and Minimatik), each in a version with silver-plated or champagne colored dial.