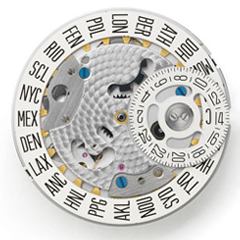 The automatic movements consist of Epsilon, Zeta (with date), and Xi (with GMT or world time disc). All three movements measure 13¾ ligne (31 mm) in diameter, but Epsilon is thinnest at 4.3 mm. Like the date wheels on the Nomos Beta, Delta, and Nomos Zeta|Zeta]], the Xi places the world time wheel outisde the periphery of the movement rather than stacked between the bottom plate and the dial. This allows the movement to be thinner than usual.

The world time function consists of an outer disc with city names or airport codes for each timezone and a 24 hour wheel at 3 00 for “home time”. It is operated by means of a pusher located at 2 00 and adjusted with a second pusher at 8 00 set flush with the case. Each time the main pusher is depressed, the central hour hand and location wheel advances by an hour. The second pusher advances the central hour hand separately from the location wheel, allowing it to be “calibrated” for the base timezone.

A direct successor to the Nomos Xi was introduced in 2014, the DUW 5201 featuring the Nomos Swing System. The Xi calibre was phased out and retired in 2016.

This movement is officially named using the Greek letter “ξ”, but Nomos often writes it as “Xi”.