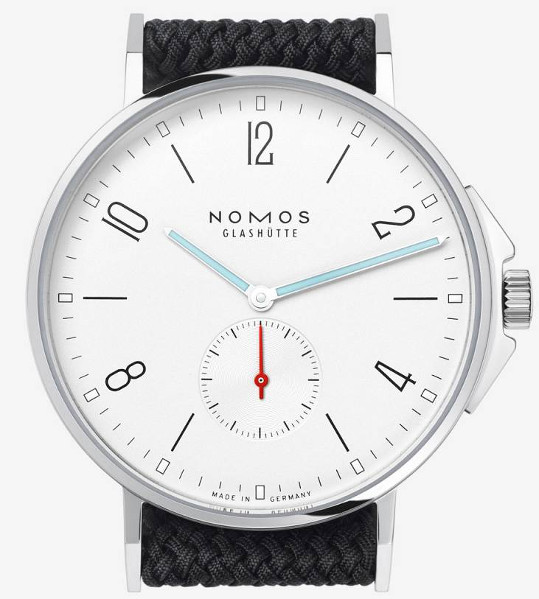 Ahoi is a waterproof wristwatch by Nomos produced since 2013.

In 2013 Nomos presented the new Ahoi model, which is waterproof up to 200 m and thus well suited for swimming. It has a similar case and dial to the existing Nomos Tangente and Tangomat with the notable addition of crown guards. In fact, the Ahoi model reference numbers are in the same range (550) as the Tangente (500).

The initial Ahoi models were a simple automatic, using the Nomos Epsilon movement, and a Datum ("date") model using the Nomos Zeta. These models moved to the DUW 5001 and DUW 5101 in 2018, using the in-house Nomos Swing System. Another model introduced in 2017 was the Nomos Ahoi neomatik, which used the “neomatik” DUW 3001 movement in a smaller case.

The Ahoi has been produced in various colorways, including Atlantik blue, lighter signalblau (“siren blue”), signalrot (“siren red”), and signalweiss (“siren white”). Most models feature a sapphire display caseback but one reference, model 550, has a solid steel back.

The Ahoi was recognized first place in the category “men's watches” by the watch magazine Armbanduhren in 2014. It also won the iF product design award that year.