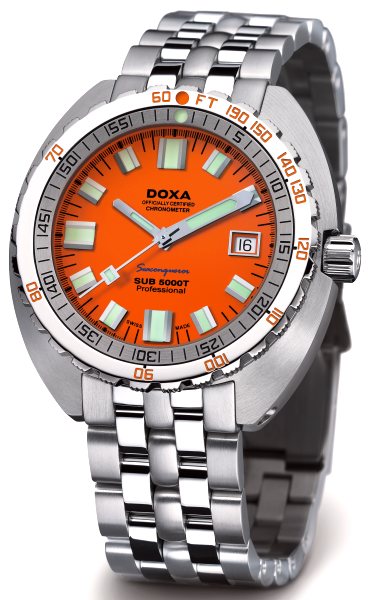 Doxa is a Swiss watch brand founded in 1889 and once again available today.

Doxa was founded by Georges Ducommun as Georges Ducommun, Fabriques Doxa in 1889 in Le Locle, Switzerland. The company rose to prominence with the 1908 introduction of an 8-day watch movement that proved its value on the wrists of German soldiers in World War I. When Ducommun died in 1936, he was replaced at the helm by Jacques Nardin, grandson of famed Le Locle watchmaker Ulysse Nardin. Doxa returned to the battlefield in World War II with a series of popular chronographs used by German aviators.

Doxa continued a strong association with Germany after the war, outfitting the German World Cup football team with gold watches and introducing “Grafic”, a line of Bauhaus square watches in 1956.

In 1967, Doxa introduced the “Sub”, a waterproof diving watch popular with sport and military divers. The orange dial of the Doxa Sub would become a hallmark for the brand.

Doxa was facing hard times, however, and the brand joined ASUAG in 1968. It was placed in their new Synchron group alongside Ernest Borel and Cyma and the three brands were marketed together throughout the 1970's. At the height of the quartz crisis, the Synchron group brands were sold and Ernest Borel and Doxa were taken over by Aubry Frères in 1978. Doxa would be Aubry's primary brand in Europe, while Ernest Borel focused on the Americas and China and West End watch in the Middle East.

In 1997, the Doxa brand was purchased by the Jenny family of Bienne, Switzerland. The Sub was re-launched in 2002 and the Grafic in 2007. Once again, Doxa focuses on sport and especially dive watches, with the orange dial Sub prominently featured. In 2014 the brand released an 8 Day “manufacture” movement watch to celebrate their history.