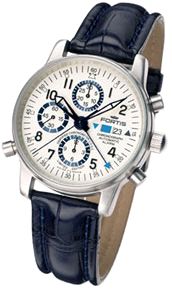 Flieger Chronograph Alarm Platin is a pilot's watch by Fortis.

Anniversary model in the series “Fortis Flieger” (Flyer). The Fortis Chronograph Alarm has two barrels and guarantees the power reserve of movement and alarm. The special rotor ensures that the kinetic energy on the wrist of the wearer is used to lift the two barrels. The gong in the form of a tuning fork and the alarm hammer creates a friendly and unobtrusive alarm signal that lasts up to 25 seconds.

For the 10th anniversary of this unique watch movement, developed by the Zurich watch artist Paul Gerber, an exclusive platinum edition of only 5 pieces was created. It is officially certified as chronometer by the COSC. This limited edition occupied the 2nd place at the election Goldene Unruh in the category up to 25,000 euros in the year 2007.