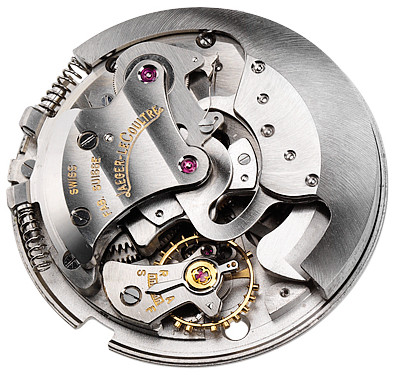 The JLC 815 is the first automatic alarm movement from Jaeger-LeCoultre.

Introduced in 1956 with the original Jaeger-LeCoultre Memovox (E 853), the Calibre 815 features a repeater alarm, the first in an automatic watch. This movement was later used in the Jaeger-LeCoultre Deep Sea Alarm (ref E 857) of 1959.

Unlike earlier automatic movements from Jaeger-LeCoultre, the 815/825 features a central sweep second hand. It is a bumper movement like earlier JLC Calibres, however, since the alarm function had to reach past the rotor to the case back.

Calibre 815 had 17 jewels and measured 14 ligne across. It beat at 18,000 A/h. It was a dual barrel movement, with one barrel providing about 45 hours of run time and the other providing 20 seconds of alarm sound.