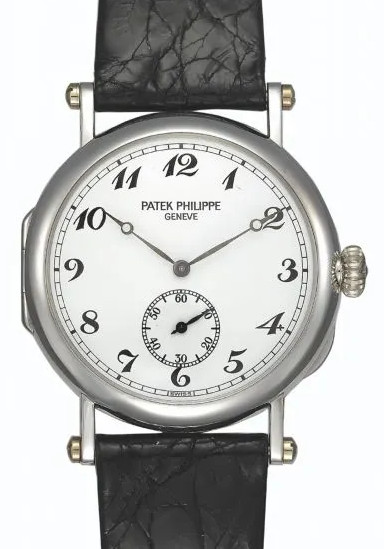 The Calatrava, Ref. 3960 is a modern incarnation of the classic Patek Philippe Calatrava.

This is the original 1989 Officer's Watch from the Calatrava line.

Although the Patek Philippe Calatrava line is best-known for the understated Ref. 5196 and hobnail-bezel Ref. 5120, Patek Philippe introduced an officer's watch as part of their 1989 150th anniversary celebration. This limited-edition piece (150 were produced) paved the way for Ref. 5022, Ref. 5053, and Ref. 5153, as well as other more complicated watches.

Ref. 3960 is true to the Patek Philippe Officer's Watch design for the most part A hand-wound small seconds movement gives it the proper dial proportions and layout, and the case is correct with screwed lugs, a large crown, and a hinged case back over a solid panel. The Breguet hands and numerals are period-correct as well, giving the piece a lovely historic look.

It is somewhat surprising that Patek Philippe chose to call this reference a Calatrava, since that line did not have a history with this style. But buyers responded well, so Patek created an unlimited model, Ref. 5022 with a similar look. The success of this model gave rise to the entire Officer's Watch family.