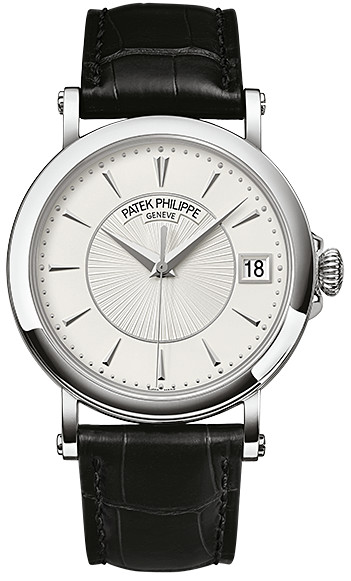 Patek Philippe has produced a number of watches in the officer's watch style, and frequently uses this term to describe these models.

Patek Philippe rose to prominence after World War I, but many Patek watches were used in the war. Some decades later, a new style of watch appeared, called the officer's watch, and evocative of the watches used at that time and on naval vessels since then. A true Officer's Watch has a round case with a simple dial, typically including small seconds and sector dial, a large onion crown, scrolled lugs with a screw-in strap bar, and often a hinged (“Officer's”) solid case back.

Patek created an Officer's Calatrava for their 150th anniversary in 1989, and this limited-edition watch proved very popular with collectors. Shortly after, Patek introduced an unlimited Calatrava model, Ref. 5022, which included some of the features and style of that limited-edition piece. This quickly became known as the “officer's case” Calatrava and sold in large numbers. A “Lady Officer's” model, Ref. 4860, was closer in style and included screwed lug bars.

In 2001, Patek Philippe introduced a new Calatrava, Ref. 5053 in a larger size and including the hinged case back made popular with Ref. 3960. This became the new definitive Patek Officer's Watch, though the use of center seconds was not in keeping with the style. The complicated Ref. 5054 used the same case but added a moon phase and power reserve indicator, cluttering the dial somewhat. Ref. 5053 was replaced with the up-sized Ref. 5153 in 2009, now at 38 mm and still with center seconds but adding a date window. This reference eschews the clean dials of previous officer's watches and includes a striking guilloche center on all models. A new Ladies Officer, Ref. 7200, was introduced in 2013 with screwed bars but with no cover over the fixed sapphire case back.

Patek Philippe has also used the officer's style on a number of non-Calatrava watches in recent years, including many that they classify as Grand Complications. Ref. 5159 (and the similar Ref. 5160) include a retrograde perpetual calendar with moon phase as well as a hinged case back over a sapphire window. Minute Repeater Ref. 5213 includes a retrograde perpetual calendar and minute repeater, while Minute Repeater Tourbillon, Ref. 5539 eliminates the calendar but includes both a minute repeater and tourbillon. Split-Seconds Chronograph, Ref. 5959 is a high-complication split-seconds mono-pusher chronograph. On the Ladies side, Patek has two “Ladies First” models Minute Repeater Ref. 7000 and Split-Seconds Chronograph Ref. 7059.