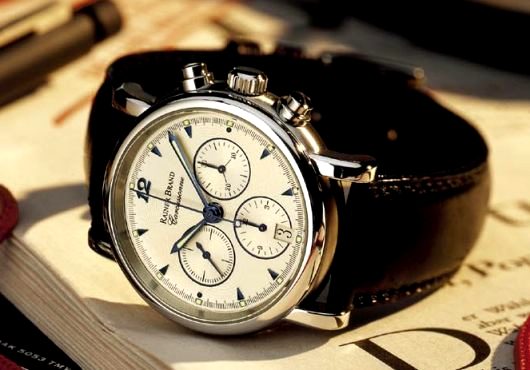 Carcassonne is a chronograph by Rainer Brand with the self-winding movement Lemania 1352.

The name of the watch is derived from the southern French city of Carcassonne in the Languedoc, which is famous for its fortress and is now one of the most completely preserved fortified cities in Europe.

This chronograph has a Tricompax display, a mechanical movement with automatic winding and is equipped with the rare manufacture movement Lemania 1352.

The contracts with the watch movement manufacturer Nouvelle Lemania finally expired in December 2002, after the Swatch Group intended to realign the newly acquired company. Due to the interruption to supply the movement Rainer Brand launched, in succession of the Carcassonne, as current model the chronograph Kerala that contains the popular and proven movement Valjoux 7750.

Copies of the Carcassonne are still very sporadically available and highly sought after by watch collectors, particularly due to the rare watch movement.