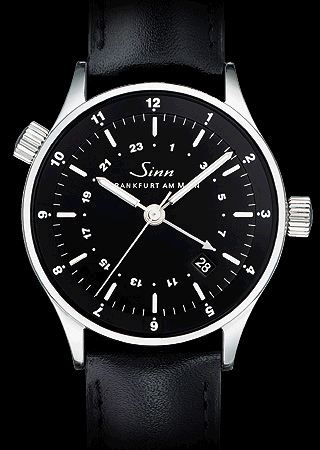 The Model 6060 Frankfurt World Time Watch is an automatic triple time zone watch from Sinn produced since 2001.It is the second model in the Sinn Frankfurt Financial District line and the first non-chronograph model.

The original Model 6000 Frankfurt Financial District Watch was an automatic chronograph but the company added this Model 6060 late in 2001. Like the original, it has an independently adjustable hand for a second timezone. The third timezone is read using the internal rotating bezel. Unlike the Model 6000, however, the central hour hand uses a 24-hour scale rather than a 12-hour.

Apart from the lack of chronograph registers and pushers and the added 24 hour track, the watch looks much like the original. It features a simple and modern 38.5 mm case, a black dial with white markers, and a rotating inner bezel marked 1 to 12. An additional crown at 10 00 operates the bezel, as on most “Frankfurter” watches. Model 6060 is equipped with the ETA 2893 movement, with the date window moved to 4 30 to blend in with the 24 hour track. The movement is visible through a sapphire display caseback. The movement was upgraded to the ETA 2893-2 in 2004. The rotor features a “bull and bear” motif rather than the Frankfurt skyline.

A limited edition of 150 Model 6060 M watches was produced in 2013. These had a brown sunburst dial and bezel but were otherwise similar to the regular model.

Sinn created a simpler dual timezone version of this watch, Model 6068, in 2015. In 2014, Sinn had created an upsized version of the original Model 6000, but it wasn't until 2017 that the company introduced the 41.5 mm version of this watch, Model 6096. All three models remain in the Sinn catalog as of 2019. Note that both models are officially called “Frankfurter Weltzeituhr” (“Frankfurt World Time Watch”), not “Frankfurter Finanzplatz Weltzeituhr” (“Frankfurt Financial District World Time Watch”). Nearly every other watch in this series uses the “Finanzplatz” (“Financial District”) nomenclature.