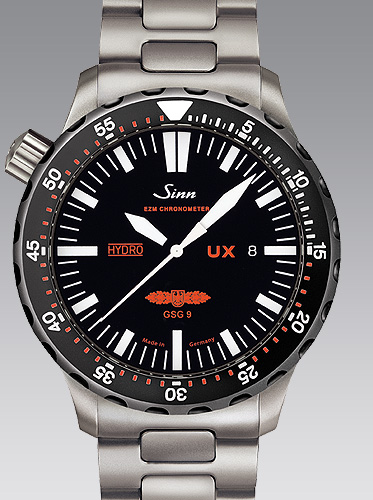 Sinn first introduced the Model 403 case as part of the Sinn EZM line in 1997. This would be EZM 2 and, like Sinn EZM 1, featured a left-side crown, rotating bezel, and large rugged case. The dial is black with white luminous markers and red accents. Most important was the oil-filled case and dial, enabling unlimited depth and giving the hands and dial a “floating” appearance. EZM 2 was produced until 2005. The original EZM 2 case measured 41 mm diameter.

In 2006, a civilian version, UX appeared and the EZM version was re-designated EZM 2B. This used a larger 44 mm case, though still used the model number 403. It was joined by a special model for the Germain GSG9 special forces in 2008. From 2010 through 2013, the EZM designation was no longer used on the model, though the GSG9 version continued. That same year, the special-edition Sansibar model appeared, along with an SDR and blacked-out S model. From 2014 to present, the model is loosely branded as UX or EZM 2B, and sometimes both.

Besides the submarine steel used for the case (like the sister models U1, U2 and U1000) the two-UX models offer a further technical finesse With the HYDRO technique the movement, dial and hands are directly embedded in a crystal clear oil storage — the watch is absolutely secure against mist, is safe against pressure for each achievable depth and has a total readability from any angle.

The case of this dive watch is made of submarine steel. Conventional stainless steel watch case has no real seawater resistance. Such enclosures are, strictly speaking, not suitable for permanent use in seawater. In search of a steel of higher quality requirements, the engineers finally made a find at the German U-boat dockyard Howaldtswerke-Deutsche Werft and Nordseewerke Emden GmbH.

This material is not only extraordinarily sea water resistant, but it also has the highest antimagnetic quality.