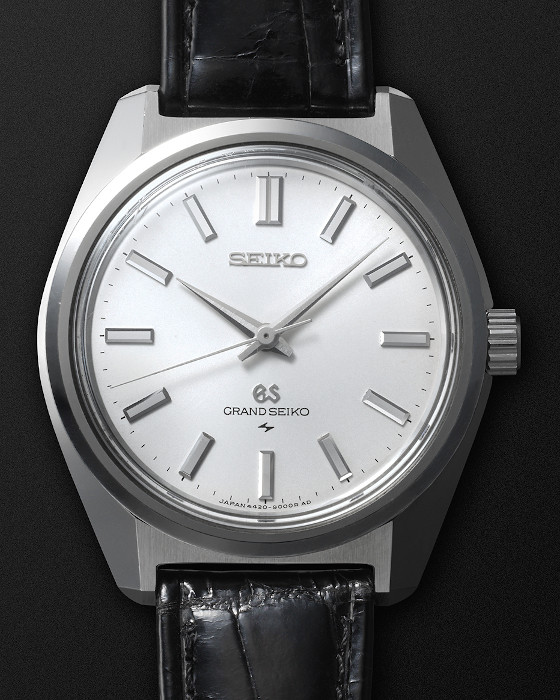 The 44GS was a high-end hand-wound mechanical watch from Seiko.

Introduced in late 1967, the 44GS is widely considered to be the progenitor of the classic Grand Seiko look, and it set the trend of “Grand Seiko Style” for decades of Seiko watches. But this watch was derived not from a Grand Seiko but the King Seiko 44KS. Indeed, the producer, Daini Seikosha, was shut out of producing Grand Seiko models in favor of in-house competitor, Suwa Seikosha. Rather than resign themselves to the lower-end market, Daini set about producing their own high-end model, the King Seiko. The resulting model was so accurate that, with a revised case, it was accepted into a three-watch Grand Seiko model lineup in 1967.

The 44GS is a simple but elegant watch, with no date window or other complications. It is manually-wound and runs at a leisurely 18,000 A/h. It was only available in stainless steel, though a screw-back case gives 50 m water resistance.

Both the 44GS and automatic 62GS appeared in late 1967, selling alongside the venerable 57GS for a year. The stainless steel version (4420-9000/44GS 020) was priced at just 24,000 Yen, 3,000 Yen below the outgoing steel 57GS (though that model had a date complication) and 11,000 Yen lower than the contemporary 62GS. Despite the lower price and attractive design, the 44GS does not appear to have been a strong seller, lasting just two years. It was phased out in favor of the Daini-produced Grand Seiko 45GS in 1969.

There were two revisions of the Daini 4400 watch

The 44GS was re-made by Seiko in 2013 in two forms: a same-size remake and a larger-cased concept with a sapphire back.