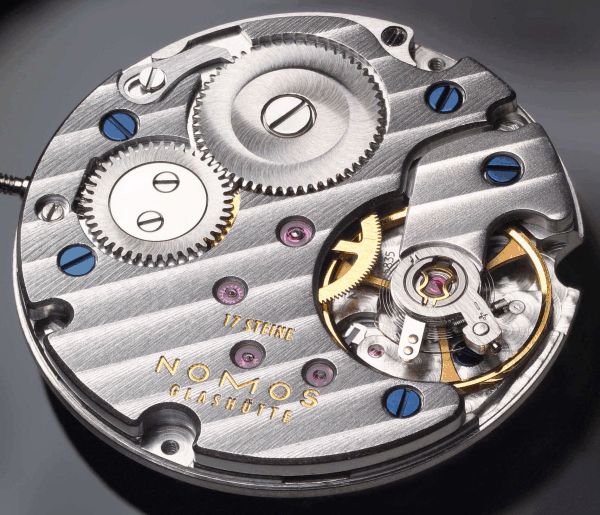 Alpha (α) is the base manual winding movement from Nomos. It is an evolution of the predecessor Nomos 1 TS and 1 TSP and was produced from 2005 until the present day.

The 2005 introduction of the Alpha movement was an important turning point for Nomos. Although based on the preceding Nomos 1 TSP, it was largely constructed in-house rather than being a refinished ebauche. The gear train is similar to the classic Peseux 7001, but was placed in a new enclosure based on the classic Glashütte three-quarter plate design. Nomos updated many of the components, adding hacking seconds, and completely reworked the finishing with rhodium-plated surfaces, blued screws, Glashütte Stripes, and Glashütte solar grinding or Langeleist-Perlage.

Calibre Alpha was released at the same time as Nomos Beta (with date) and Nomos Delta (with date and power reserve indicator). All three are hand-winding movements, as was the Nomos Gamma which followed in 2007. In 2006, Nomos followed with a family of automatic movements, Epsilon, Zeta, and Xi, with similar features. Alpha is smaller than the others, however, at just 23.3 mm diameter and 2.6 mm thick.

This movement is officially named using the Greek letter “α”, but Nomos often writes it as “Alpha”.

Although Nomos has begun replacing most movements of this generation with replacements featuring the Nomos Swing System, Alpha remains in production as of 2019 with no direct replacement.

In 2019, Nomos introduced a version without the small seconds hand and associated gears. Alpha.2 has the same external dimensions, decorating, jewel count, and features. It is used in the Tetra 27 duo, Orion 33 duo, Ludwig 33 duo, and Tangente 33 duo.