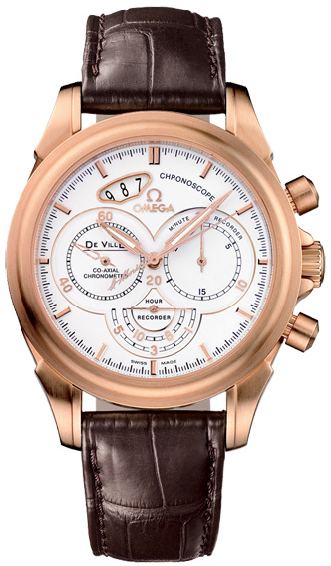 De Ville is the name of a wristwatch series by Omega.

The term De Ville was launched for the first time by Omega in October 1960, when new models of the series Seamaster were presented; from 1963 on the inscription “Seamaster De Ville” appeared on the dials.

Basically the name, since the 1960s, identified the simple and yet elegant models of Omega, in contrast to the sporty lines Seamaster or Speedmaster. So soon also the certification as chronometer was included as one of the characteristics of the series.

A special step was taken 1999, when Omega chose a new De Ville model for the initial presentation of the innovative co-axial escapement.

To emphasize the reliability of the new technology, Omega granted to garantee for all De Ville models with co-axial escapement a warranty of three instead of two years.