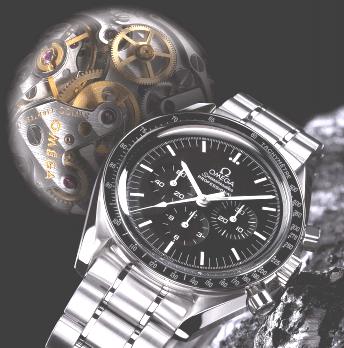 The Speedmaster is a famous sports chronograph series by Omega.

The 39 mm Calibre 321 “Speedmaster” sports chronograph (Ref. CK 2915) was introduced in 1957, with sales and marketing started the following year. It was billed as a “new type of chronograph, with a tachometer[sic] and production meter, designed for research, industry, and sport.” The Speedmaster (Ref. CK 2998) grew to 40 mm in 1959, with the arrow-shaped hands replaced by dauphine hands. The model was revised in 1962 with new reference number (ST 105.002), bezel metrics, including tachymeter, pulsometer, telemeter, telemile and decimal. Beginning in 1963 (Ref. ST 105.012), the case was enlarged to 42 mm, with an asymmetrical design to protect the pushers and crown and twisted lugs. After this reference was used in space, a new Speedmaster "Professional" (Ref. 145.012) was introduced in 1966.

The Speedmaster was changed dramatically in 1968 (Ref. 145.022) with the addition of a new movement, the Omega/Lemania Calibre 861. An entirely new "Mark II" Speedmaster was launched in 1969, but the classic remained in production. The first automatic Speedmaster appeared in 1971, the Mark III, which broadened the case design options further. A diver's chronograph was added for 1972, and a chronometer followed in 1973. Another new case style and a new automatic movement came in late 1973 with the Mark IV.

Electronic movements joined the Speedmaster ranks in 1973 with the introduction of the tuning fork electric Omega Chronometer Speedsonic F 300 HZ. The first quartz Speedmaster came in 1977, the Omega Speedmaster Quartz, complete with a digital display.

As mechanical watches regained popularity in the late 1980's, Omega began reinvigorating the Speedmaster family with transparent case backs and a more-decorated movement. Next up was the German-market Mark V in 1984, followed by the Speedmaster Professional Moonphase in 1985 and "Holy Grail" Speedmaster 376.0822 in 1987. The 1988 introduction of the smaller Speedmaster Reduced opened new markets, with a modular automatic chronograph but classic good looks. The 1990 non-chronograph Speedmaster Classic series was a mistake, but a perpetual calendar pointed to better times in the 1991 Omega Speedmaster Perpetual.

The “Speedmaster” series is now a major pillar of the Omega brand. Various special editions are regularly issued.

In 1965, NASA selected the Speedmaster as their official astronaut watch, and the company began selling a Speedmaster Professional model inspired by this in the following year. Astronauts Virgil ‘Gus' Grissom and John Young wore Omega Speedmasters on the first Gemini manned mission later that year, and Ed White completed a space walk with a Speedmaster on his wrist that year as well. On July 21, 1969, Buzz Aldrin wore a Speedmaster Professional on the moon, making this the first and only wristwatch worn on another celestial body. The Speedmaster was also instrumental in the failed Apollo 13 mission, with Jack Swigert using his chronograph to time course-correction engine burns. 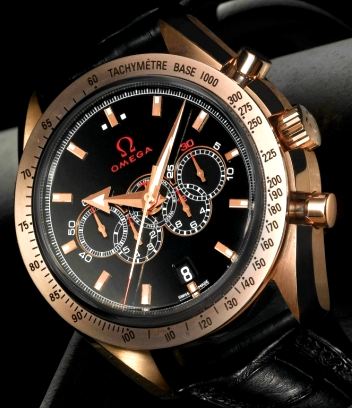