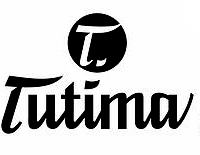 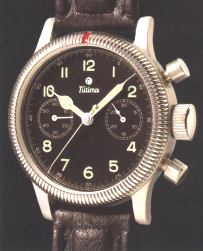 The quality grade 'Tutima' was introduced of the Glashütter Uhrenfabrik AG (UFAG) at about 1930. Pocket and wristwatches of this quality brand were equipped with movements of its sister company UROFA (including Calibre 19''' and Calibre 58).

From 1941 was also launched the pilot's chronograph under this brand name for the German Luftwaffe (air force). In 1945 with the removal of the UROFA and the UFAG disappeared also the Tutima brand name. It was not until 1956 when Werner Pohlan, a former employee of UROFA, again used this traditional name for his watches.

Dieter Delecate, former employee in the commercial sector and the distribution of the watch factory Kurtz, after the end of the Kurtz company founded a wholesale for watches in 1957. The company saled watches of Werner Pohlan as well as of the company Neufing KG Delmenhorst.

On 7 April 1970 Delecate registered at the German Patent Office for his company the traditional name Tutima formerly established by the UFAG and operates since then under the name of Tutima-Uhrenfabrik GmbH (Tutima watches company). Erwin Brückemann — whose craftsmanship was decisively influenced by Paul Johne and by a watchmaking education in the Kurtz company — was then responsible for watch technology at Tutima.

The pilot's chronograph of the Bundeswehr (German armed forces) with the calibre Lemania 5100 was a specialty of the house. In 1994, on the occasion of the 95th Birthday of Dr. Ernst Kurtz, the company presented a replica, calibre ETA 7760, of the former original Calibre 59.