Frederique Constant is a Swiss watch manufacturer, currently owned by Citizen of Japan.

In 1988 Frederique Constant was founded in its current form as a separate and independent family enterprise. Aletta Bax and Peter C. Stas had previously, after a long working day, invested their spare time and their passion in the design of watches. This led to their first collection six models with Swiss movements, made ​​by a Geneva watchmaker, that could be presented in 1992. 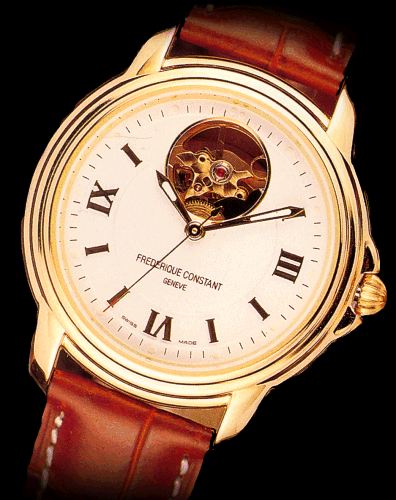 A characteristic feature of the series Heartbeat, developed in 1994, is, according to the name, an opening in the watch dial, through which the pulsations of the balance can be observed. Hereby the trend towards the mechanical wristwatch, germinated in the 1980s, is congenially taken up again, and Frederique Constant is the first brand, even ahead of Zenith with their Open series and others, who consistently provide a dial-sided view on the watch movement. Since at that time one had forgotten to register this idea, quick imitations hit the market. The credit of the original inspiration, together with the implementation, nevertheless remains due to the couple Stas.

With the self-produced, from 2004 mass-produced Heart Beat calibre FC 910, the brand positions itself as a manufacture. It was developed by an in-house team with eight experts from the École d'Horlogerie de Genève, the École d'Ingénieurs de Genève and the Horloge Vakschool Zadkine. Despite this high production competence, which even cannot be encountered at many luxury manufacturers, the brand is not aimed at consumers in the area of prohibitively expensive watches, but still remains orientated towards a favorable price-performance ratio.

In April 2008 a bracelet tourbillon with silicon escape wheel is launched as a world premiere.

The rapid rise stunned the industry

Since its inception, the brand has managed a rapid rise, inspired by the freshness and innovativeness of their young owners. So during the first 15 years the company has annually grown by 25-50%, and in a market that is as densely populated with a variety of locally and globally competing vendors as hardly any other.

Since 2006 the company is based in the Geneva suburb of Plan-les-Ouates, in the neighborhood of firms like Rolex, Patek Philippe and Vacheron Constantin.

Frederique Constant is a manufacture with in-house movements, along with continued use of ebauches from other suppliers.

In their company press release the owners are writing as follows; and their words speak well for themselves

We are a young passionate watch manufacture in Geneva, producing beautiful timepieces for dynamic people. Our mission is to make Swiss luxury watches accessible to the customer at reasonable prices.

From the start we wanted to produce classic Swiss watches at competitive prices. We were in our early 30s, newly married and with virtually no assets. No complaints about our salary, but it would not have been sufficient enough for a watch at 15,000 CHF. However, we were very interested in beautiful high-quality Swiss timepieces. Thus, we were our own target consumer. It is important to know, that Frédérique Constant is still the same concept and pursues the same position. We believe in the original concept and business model.

Since several years, the company gives away the “Frédérique Constant Passion Award” for impressive creative achievements. The motto is “Live your passion!”

In the area of sponsorship, Frédérique Constant has started a collaboration with the traditional automotive brand Healey. So it joined the “Third European Healey Meeting in Sweden” as the main sponsor and has created a new, limited watch edition “Healey”.

In 2016, it was announced that Citizen Watch Company of Japan would acquire Frederique Constant Holding, along with its manufactures and brands. Citizen also owns Arnold & Son, Angelus, and La Joux Perret as well as Bulova and the Citizen brand.