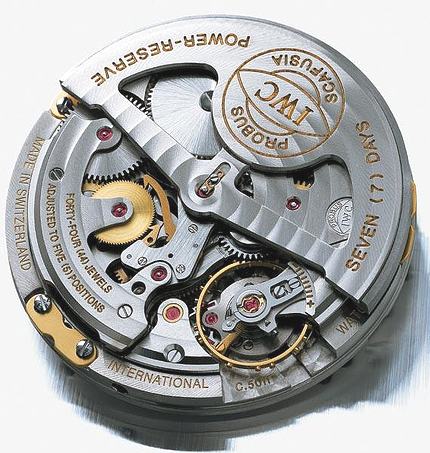 The Cal. 50000 family is a group of large automatic seven-day watch movements by IWC produced since 2010.

On its release in 2000 in the limited-edition IWC Portugieser 2000, IWC's Cal. 5000 was lauded by the brand's followers. It marked the restart of completely-in-house watch movement development for the company and resurrected the legacy IWC Portugieser watch design. The movement was seen as a landmark in other ways, with 8-day power reserve, automatic winding, and a massive 16.75 ligne (38.2 mm) diameter.

Most importantly, Cal. 5000 brought back IWC's legendary Pellaton winding system. For its second life, the Pellaton system gained two pawls instead of one, with both pulling the massive 8-day mainspring barrel whenever the rotor turned in either direction. The rotor too was a massive one, both to fit the movement diameter and to wind that over-sized spring. Indeed, the rotor includes its own shock absorber to resist breakage in daily use.

Another concession to the massive mainspring, with its varying isochronism, is the use of two different regulating mechanisms. The traditional IWC balance wheel features an adjustment screw on each of its two arms, and a conventional screwed index is also provided on the bridge. This allows the watchmaker to adjust the watch for timekeeping over a short or long duration. The balance wheel is quite large as well, ticking at a slow 18,000 A/h, and is said to be the same as found in the predecessor Portugieser movement, Cal. 89. A final nod to power reserve is the use of a mechanism to stop the balance after 7 days, retaining the final day of reserve to restart the watch when it is picked up.

The fact that Cal. 5000 uses a single mainspring and barrel has impacted the reputation of this movement. As admitted by Richard Habring and other IWC staff, the watch was meant for “weekend wear” and is thus tuned to keep time accurately over a week. But the single mainspring does not deliver power consistently, so the movement runs quite fast for the first two days, more predictably for the next few, and slows down at the end. This causes issues for timing, maintenance, and daily wear. The follow-on Cal. 52000 used double barrel construction to deliver more consistent torque and timing throughout the week.

IWC updated the naming (though the movement stayed mostly the same) around 2005 as Cal. 50010. This movement family is being phased out after 2015 in favor of the newer IWC 52000 series with double barrel power.