The AMG brand of Mercedes-Benz (now known as Mercedes-AMG) has appeared on a series of watches from companies including Sinn, Anonimo, Panerai, and IWC.

The German maker Sinn was the first to produce AMG-branded watches. Two models were created Ref. 956.1103 (limited to 250 pieces) and Ref. 303 "35 years AMG" (limited to 350 pieces). Both feature the AMG brand on the dial at 9 00 and the Ref. 956 also has the logo on the automatic movement rotor, visible through its display caseback.

One of the bidders for the Mercedes-AMG partnership was Anonimo, who produced 80 prototype Chronoscopio models with the AMG logo. It is said that 50 hand-winding and 30 automatic models were produced. 50 were given to AMG, with the rest released to employees or sold. The watch featured AMG branding on the dial at 9 00, with chronograph totalizers at 12 and 6 and the date at 3. The movement is visible through a display caseback. The buckle is signed Anonimo.

From 2004 through 2018, IWC partnered with Mercedes-AMG on a long-running and popular series of watches under the IWC Ingenieur line. Almost all IWC AMG watches feature exotic titanium or ceramic cases and AMG lettering on the case back. Most are based on normal-production IWC Ingenieur models, with some of those being called “AMG” models even though they are not technically part of this line. 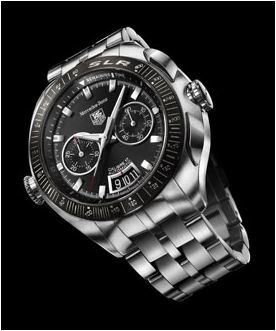 Mercedes-AMG, Automotive watch brands
We use cookies and other tracking technologies to improve your browsing experience on this website and for data collection for personalized ads.More information
mercedes-amg.txt · Last modified: 04.11.2021 14:20 by gerdlothar