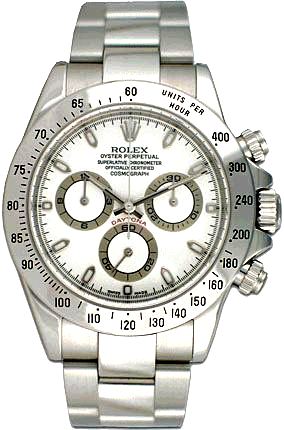 The Cosmograph Daytona is a sports chronograph by Rolex, produced since 1963.

Rolex introduced the “Cosmograph Daytona” in 1963, ten years after introducing their first Oyster-case chronograph model. The watch featured the Cosmograph name on the dial, and Rolex chose to connect it with auto racing due to the tachymeter printed on the bezel. This was a distinct departure from previous Rolex chronographs, which located any such markings under the crystal, and became the signature feature of the Cosmograph model.

The original watch was marked “Cosmograph” and marketed as the “Le Mans” in period advertisements. In 1965, Rolex began to use the “Daytona” name for the model, in recognition of the American racing mecca, Daytona Beach, Florida. This name also appeared on the dial for the first time, typically above the subdial at 6 00 rather than at 12 00 with “Rolex” and “Cosmograph”. Over the ensuing years, the model has definitively become known as the “Cosmograph Daytona” or even just “Daytona”.

The distinctive characteristics of the model are the outer tachymeter bezel, simple bar markers, and trio of subdials arranged at 3 00, 6 00, and 9 00, usually presented in contrasting colors or with contrasting rings. Most Cosmograph Daytona models use the Oyster bracelet, though some have been sold with a jubilee bracelet or leather strap.

The original Cosmograph Daytona models used a hand-winding movement from Valjoux, but Rolex adopted the high-beat automatic Zenith El Primero movement in 1988. In 2000, Rolex presented their first in-house chronograph movement, Cal. 4130, in the Ref. 116500 model. These modern watches share the distinctive look of the original Cosmograph of the 1960s and remain highly prized today.

Rolex introduced their first Rolex Oyster chronograph models in 1955. The original Ref. 6234 is widely considered to be a precursor to the Cosmotraph Daytona, though it lacks many of the distinctive features of that model. Produced until 1961, Ref. 6234 had an inner tachymeter and telemeter scale in most examples, along with the 3-6-9 arrangement of subdials typical of the Valjoux movements in wide use at the time.

Most collectors consider the next Rolex chronograph, Ref. 6238, to be the true “Pre-Daytona” with modern baton hands, faceted applied hour markers, and simplified monochrome dials. Importantly, the telemeter scale was removed, retaining only the racing-oriented tachymeter. The case was enlarged to 37 mm which visually pulled the subdials inside the hour ring, strongly suggesting the later Cosmograph. These watches included a customized version of the Valjoux 72 hand-winding movement, which Rolex named 72 B at first and 722 after 1965. This reference was used by George Lazenby while playing James Bond in On Her Majesty's Secret Service in 1964, lending the actor's name to the model. Ref. 6238 was not an Oyster, as it lacked a screw-down crown and waterproof pushers. It was not until the Ref. 6240 of 1965 that the company would produce a waterproof chronograph.

The first watch to bear the “Cosmograph” name was the Ref. 6239, introduced in 1963. This model features the definitive characteristics that have lasted to this day, notably the tachymeter engraved on the outer bezel with the text, “units per hour” appearing at 1 00. It also featured the contrasting dial and subdials that has become iconic today, with either black on silver or silver on black versions. First advertised as the “Le Mans” Ref. 6239 adopted the “Daytona” name in 1965 and this would be scripted above the subdial at 6 00 on nearly every model since.

In 1965, Rolex presented the first waterproof Cosmograph Daytona, Ref. 6240. This featured a screw-down crown as well as screw-down pushers, earning it the Rolex Oyster name. It also featured a twist on the engraved bezel, adopting a plastic insert similar to the Rolex Submariner. These novelties, combined with a short production run ending in 1969, has made Ref. 6240 one of the most desirable for collectors today. A similar version, Ref. 6241, has the plastic bezel without the waterproofing.

In the early 1970s, Rolex produced four different Cosmograph Daytona references with the updated Cal. 727. Ref. 6262 and Ref. 6264 were produced from 1970 through 1972 with simple pushers and metal or black plastic bezels, respectively. Two waterproof Oyster versions were produced starting in 1971, Ref. 6263 and Ref. 6265. The former featured the black plastic bezel while the latter has the engraved metal bezel. These were produced until 1987 with many examples featuring gold cases. A few rare diamond-set Cosmograph Daytonas were produced by Rolex in 1984, Refs. 6269 and 6270.

An Exotic Dial Cosmograph Daytona has markers moved to an outer track around the dial, giving a plain, monochrome look overall. Actor Paul Newman received a Ref. 6239 from his wife, Joanne Woodward, in 1972, though he had owned a Ref. 6263 previously. He was often photographed with these watches, and the model, especially with the exotic dial, has become known as the “Paul Newman” ever since. Collectors today consider any Ref. 6239, 6241, 6262, 6263, 6264 or 6265 with an original exotic dial to be a Paul Newman watch.

Rolex radically changed the Cosmograph Daytona line in 1988, launching the Ref. 16500 family with an automatic movement supplied by Zenith and a larger 40 mm case with a sapphire crystal. These new references specifically recalled the Ref. 6265 from the previous decade with an engraved metal bezel and screw-down crown and pushers, though crown guards were added as well. Inside was the new Cal. 4030 automatic chronograph movement, based on the famous and respected Zenith El Primero 400 high-beat movement. The steel Ref. 16520 exceeded all expectations, becoming a modern classic. Rolex also produced a two-tone Ref. 16523 and all-gold Ref. 16528, both with Oyster bracelets, and Ref. 16518 in yellow gold and Ref. 16519 in white gold with leather straps.

At Baselworld in 2000, Rolex introduced their own in-house automatic chronograph movement, Cal. 4130. Although no longer a high-beat movement, this new calibre was thoroughly modern, with Rolex's own balance spring, hacking seconds, and power reserve of 72 hours. It featured just 290 components, less than most competing movements, making it easier to service. The new Ref. 116500 family had a similar appearance to the previous Ref. 16500 family but was thinner thanks to this new movement. The new movement also necessitated switching the chronograph hour and small seconds counters at 6 00 and 9 00, and the subdials are also moved up slightly, no longer even with the center axis. In addition to Ref, 116520 in steel, Rolex produced Ref. 116523 in steel and gold, Ref. 116528 in yellow gold, Ref. 116509 in white gold, and Ref. 116505 in Everose. The Cosmograph Daytona line was again updated at Baselworld in 2016 with Cerachrom bezels though the reference numbers remain the same.