Grand Lange 1 “Luna Mundi” is a set with astronomical luxury watches by A. Lange & Söhne

The Grand Lange 1 “Luna Mundi is only delivered as a duo, namely as a set with two watches in a precious wooden box Luna Mundi / Ursa Major (Great Bear) in white gold and Luna Mundi / Southern Cross (Southern Cross)in red gold. The unique moon and star exploration by A. Lange & Söhne with the continuous phase of the moon drive and with the respectively correct representation of the moon for the northern and southern hemisphere is limited to 101 pieces.

The exclusive watch couple puts forward a patented big date and a traditional double barrel with a power reserve for more than three days. All the typical Lange quality features can be admired at the caseback with sapphire crystal en détail Glashütte three-quarter plate from untreated, cross-rolled German silver, screwed gold chatons, hand-blued screws, hand-engraved balance cock with swan-neck precision regulator and shock-protected screwed balance, edges of the plates angled and polished by hand and a complex surface decoration.

About the moon and stars exploration

For centuries it was at best noticed by sailors and world travelers, that the view of the sky changed dramatically with the location. Above all, that the increasing and decreasing crescent of the moon appears in mirror image to the people of the northern and southern hemisphere. Only full moon and new moon are experienced the same on both hemispheres. The watch industry, traditionally-based on the northern hemisphere, has largely neglected this fact. It took, in an increasingly globalized world, the momentum of the South in order to end the northern privilege of a realistic moon phase display.

The Grand Lange 1 “Luna Mundi 'is the attractive reply of A. Lange & Söhne to the downright historic omission. The watches couple in the new 41.9-millimeter Lange 1 case with the correct representation of the lunar path for the northern and southern hemisphere is offered exactly 101 times as a set - as “Luna Mundi / Ursa Major” in the cool case in white gold for the moon showing the northern hemisphere and as “Luna Mundi / Southern Cross” in the warm tone of the red gold case for the southern hemisphere. The two dominant constellations in the northern and southern sky, Great Bear and Southern Cross, respectively symbolize the two forms of representation on the dial and on the associated moon phase disc.

With the moon those two constellations walk around on the disc on the small stage in the decentralized seconds circle which since ancient times have grown the ancient myths of humanity The Great Bear (Ursa Major) as the third largest constellation with its seven brightest stars contains the so-called Big Dipper in Central Europe, the English speak of Great Plow, the Americans of the Great Dipper. The Roman poet Ovid tells us in his “Metamorphoses” the story of the nymph Callisto. After she had given herself to Zeus, she was transformed by Diana into a bear - on whom had been imposed never to reach the refreshing Okeanos, which means the ocean. As a circumpolar constellation of the Great Bear is always seen above the horizon and thus never reaches the water. An astronomical rather small star, but in the southern hemisphere certainly the most famous, is the Southern Cross', amidst the bright band of the Milky Way. At the time of Ptolemy it was still counted as one of the centaurs, but, by its striking form in the eyes of the sailors of the 16th century, won the importance of an independent constellation for navigation, because it hints the way to the south. 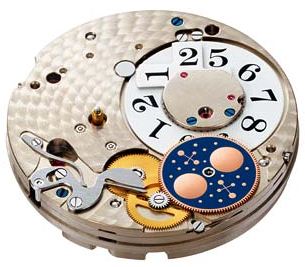 For the first time in the enlarged case the continuous lunar phase drive of the Lange 1, which was presented in the previous year, comes to use with the two watches. Behind this are the two Calibre variants L901.8 for the northern hemisphere and L901.7 for the southern hemisphere, which reverses the direction of rotation of the moon via an additional gear. Common for the watch couple is therefore the moon representation which was for the first time realized 2002 in the Lange 1 Moonphase, which certainly comes next to our real view of Earth's natural satellite. The rising and setting moon in the seconds subdial is in fact always in motion, as long as the watch is running. The display is not switched one or two times per 24 hours. Rather, it is connected to the continuum of the hours wheel and thus - but hardly noticeable to the eye - always on the move.

Due to the extremely high precision of the transmission, the synodic period of the Moon around the Earth with an average of 29 days, 12 hours, 44 minutes and 3 seconds is shown so accurate, that the display error reduces to 1.9 seconds per day or 57 seconds per lunar cycle and thus showing an error of only one day in 122.6 years. With the pushers recessed in the case between “7 and 8 clock” the moon phase displays may be adjusted as required.

Using a text by A. Lange & Söhne

Watch models, Watches with moon phase, Astronomical watches, A. Lange & Söhne models
We use cookies and other tracking technologies to improve your browsing experience on this website and for data collection for personalized ads.More information
a._lange_soehne_grand_lange_1_luna_mundi.txt · Last modified: 11.10.2021 16:35 (external edit)