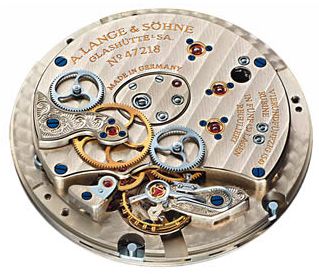 Lange 1 Time Zone is a luxury watch by A. Lange & Söhne.

The first generation from 2005

With a second time zone and the motto “Born in Saxony, at home in the world”, the Lange 1 Time Zone in 2005 wrote yet another chapter in the successful history of A. Lange & Söhne. It began fourteen years ago when the Lange 1 had its debut.

Its off-centre dial layout, the double barrel with a power reserve of three days, and the first outsize date in a regularly produced wristwatch inspired an entire industry. And its exquisitely crafted movement delivered proof that precision watchmaking had finally rediscovered its second home outside Switzerland.

All these features are embodied in the Lange 1 Time Zone – complemented with an easily adjustable display of the hour in a second time zone. Unlike other watches with a second time zone, it offers a further genuine benefit an ingenious adjustment mechanism makes it possible to conveniently swap the home time displayed on the large dial and the zone time indicated on the subsidiary dial. As an alternative to the original combination of an 18-carat pink-gold case with a bright argenté dial, the solid silver dial is now also available in distinguished grey.

A closer look reveals a second, rather exotic change A South American president turned the hands of the clock and gave his country a new time zone. His decision to move the time in Venezuela back by half an hour (UTC–4 30) disqualified Caracas as the reference city for Atlantic Standard Time (UTC–4). This role has now been assumed by Santiago de Chile. The “CARACAS” on city rings – and this applies to all siblings in the Lange 1 Time Zone family – will henceforth be replaced by “SANTIAGO”.

Using a text by Lange

Since 2020, the newly developed caliber L141.1 is used, which achieves the same high power duration of 72 hours with only one barrel instead of the previous two. This version features a new ring-shaped day/night indicator, which improves readability. The city ring does not claim the functionality of a world timer, but is used for easier setting of the second time display.

The case is now available in yellow, red or white gold.