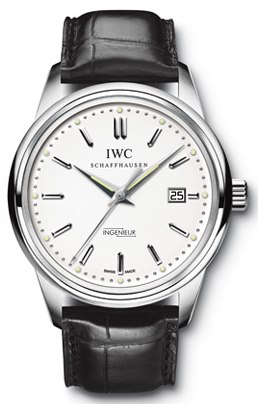 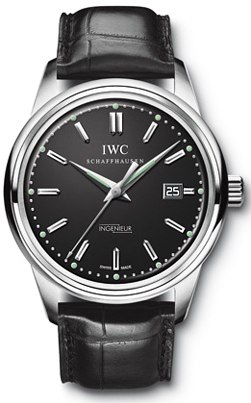 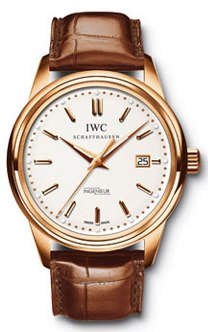 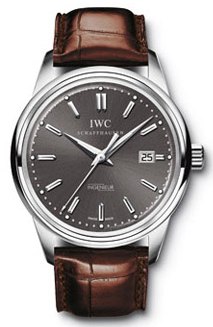 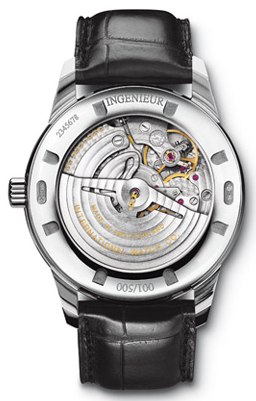 IWC had stopped producing most in-house movements during the quartz crisis and turned to Jaeger-LeCoultre (then 55% owned by IWC parent company LMH) for the “Officially Certified Chronometer”. But Cal. 887/2 (based on the Jaeger-LeCoultre Cal. 889/2) was also used in the competing Audemars Piguet Royal Oak and Vacheron Constantin Overseas. IWC had a great deal of experience with the ETA 7750 chronograph movement and used this basic design to create the new in-house Cal. 80000 family, launched in 2005 with the Ref. 3227 Ingenieur Automatic.

That same movement was used in this 2008 Ref. 3233 “Vintage” Ingenieur, a model meant to recall the original Ref. 666AD from 1955. Like the original, the “Vintage” Ingenieur had a conventional case unlike Genta's Ingenieur SL and stood out strongly among the high-tech Ingenieur models offered that year as well as the existing Ref. 3227 Ingenieur Automatic. It used dauphane hands like the original but the pointed bar markers, sculpted bezel, and pointed lugs more resembled the Ref. 866 of 1967. The 42.5 mm case was much larger than the originals, however.

The display caseback showed IWC's in-house Cal. 80111 and revealed another first This Ingenieur lacked any resistance to magnetism, once a hallmark feature of the model. This feature would be omitted from many future models in the Ingenieur line, much to the chagrin of enthusiasts.

The “Vintage” Ingenieur was phased out in 2012, to be replaced by the modern Ref. 3239 Ingenieur Automatic the next year.

In 2011, the Ingenieur design was rebooted again with a new case, first in the Ref. 3765 Ingenieur Double Chronograph and later on a variety of other models. The entire range was refreshed in 2013, centered on the Mercedes-AMG partnership.