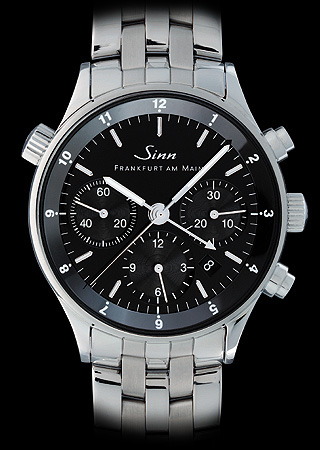 The watch uses a Valjoux 7750 automatic chronograph movement modified to add an independently adjustable hand for a second timezone. The third timezone is read using the internal rotating bezel. Both of these use a 12-hour scale rather than the 24-hour scale used on many other GMT watches.

The original Model 6000 Frankfurt Financial District Watch used a 38.5 mm case, which was large for the time but seemed increasingly diminutive 10 years later. Yet this original model remains in production as of 2019, making it one of Sinn's longest-running models. In 2014, Sinn launched a larger version, Model 6099, with a 41.5 mm case. That model differs mainly in using a Sellita SW 500 ebauche, a D3 crown in addition to the pushers, and being .5 mm thinner.

In addition to the classic stainless steel model, Sinn also produced versions in white gold, rose gold, and platinum. The first such model was the 2001 “6000 Jubiläumsuhr” (“Anniversary Watch”), which celebrated the company's 40th anniversary. It featured a white gold and palladium case and anthracite dial as well as the company's proprietary DIAPAL lubricant-free diamond jewels on the anchor pallets. The rotor features the usual engraving of the Frankfurt skyline as well as the anniversary dates, “1961 - 2001”. This was a limited edition of just 40 pieces. The 6000 Jubiläumsuhr received the prestigious Goldene Unruh award in 2006 (after the model was sold out) in recognition of this DIAPAL escapement material.

In November 2007, Sinn released a rose gold version of the Model 6000 as celebration for the Goldene Unruh award. This new version was not a limited edition and remains for sale to the present day. It uses a Valjoux 7752 F movement and has a 16.5 mm thick case. In September, 2009, Sinn launched the “6000 Platin Jubiläum II” (“Platinum Anniversary II”) to celebrate the 10th anniversary of the model. Just 10 examples of these platinum watches were produced.