A pilot's watch is a watch type which is specially tailored to the needs of aircraft pilots. As first pilot's watch the Santos by Cartier is considered (see link to the story). 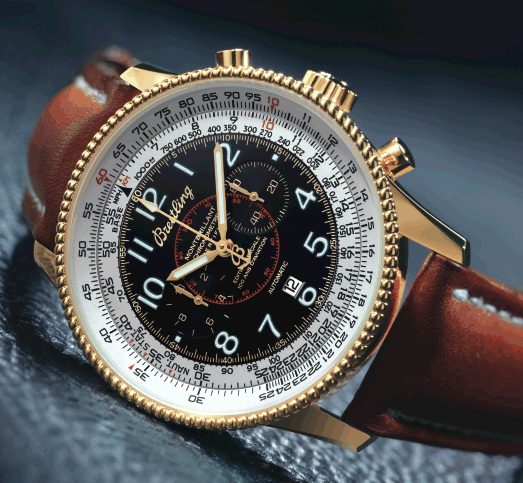 It cannot be rigidly defined, which attributes a pilot's watch must have. There are chronographs, but also usual manual winding and automatic models, and there are models with bidirectional rotating bezel for the measurement of intermediate times (e.g., the air force chronographs Tutima or Hanhart), or without rotating bezel, and there are navigation watches as the Longines Lindbergh or Longines Weems, which allow the calculation of positions. There are also watches with logarithmic slide rules with which flight distances can be calculated (Breitling Navitimer). Also models used in space can be found, including the legendary Moon Watch (Omega Speedmaster Professional) or the Official Cosmonauts Chronograph by Fortis.

A flyback function can also be useful as an additional complication with pilot's chronographs, which offer a simple way (by pressing just one pusher) to measure intermediate times. Also useful is a good protection against magnetization. Several models have extended or flipout bracelets, which allow to wear the watch on the aviator jacket.

The specialization in pilot's watches is well accepted by the market, since these watches with their distinctive appearance lie in the trend and are associated with features such as “male” or “sporty”. Especially the brand Breitling owes its brilliant re-ascent in the 80s and 90s not least to this image.

Terms
We use cookies and other tracking technologies to improve your browsing experience on this website and for data collection for personalized ads.More information
pilot_s_watch.txt · Last modified: 11.10.2021 17:01 (external edit)