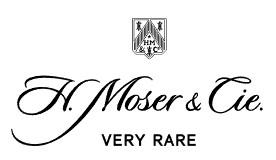 Heinrich Moser (born December 12, 1805 in Schaffhausen) founded H. Moser & Co. in 1828 in St. Petersburg and opened a watch factory in Le Locle the following year. Moser returned to Schaffhausen in 1848 and began developing industry in the area over the following decades. His wife Charlotte died in 1850, and Moser focused on work from then on.

Moser designed and built the “Moser Dam” in Schaffhausen between 1863 and 1866, one of the first hydropower stations. This brought mechanical energy to the local watchmaking factories and established the town as a center for production, and remained in use until 1959. He was also influential in the creation of Swiss railways, establishing the second rail line in Switzerland (between Schaffhausen and Winterthur) and founding a company to produce railway wagons. Another Moser company produced ships to transport cargo on the Rhine.

In 1868, Moser supported the American Florentine Ariosto Jones in founding the International Watch Company (IWC) in Schaffhausen, one of the major Swiss watch companies today. IWC watches were originally produced in the Moser factory in Schaffhausen before a dedicated factory was constructed nearby.

Moser died in 1874 and his fortune returned to Russia before being expropriated by the government in 1918.

The Moser company in Le Locle continued production of pocket watches, moving to wristwatch production in the 1950s. This incarnation variously traced its roots to 1826 and 1926, and marketing often mentioned “more than a century” of history.

Moser in Le Locle was located on Rue du Pont 160 in 1847 but relocated to Grande Rue 68 in 1849. This location was renumbered as 72, 148, and finally number 5 in 1899. By 1908, the company was listed as Succursale Hy. Moser & Cie. and the new address in 1913 was Rue Alexis Marie Piaget 12 and 14. This incarnation was advertised as “Horlogerie de Précision” and boasted of simple and complicated watches. A 1927 advertisement shows an octagonal pocket watch with an integrated bow.

Hy. Moser produced a novel jumping second model in 1955, known as the Moser Saltofix. By 1960, the Moser Dayter challenged Rolex with a similar day-date movement. Moser added braille watches in the 1960s.

In the 1970s, Moser specialized in high-end jewelry watches with precious metal cases.

Hy. Moser & Cie. was acquired in 1974 by another high-end Le Locle watchmaking firm, Paul Buhré. The industry was suffering at this time, and local businessman Paul Castella had acquired many Le Locle firms using the funds of toolmaker Dixi, starting with Paul Buhré in 1963 and culminating with Movado-Zenith-Mondia in 1978. Production of Hy. Moser & Cie. watches continued for a few years, many using a supply of ultra-thin movements from Frédéric Piguet, acquired with the acquisition of Robert Cart in 1970. In 1979, as the quartz crisis decimated demand for mechanical watches, the Moser brand was retired and the Le Locle factory was taken over by Dixi.

On October 29, 1988, H. Moser & Cie. (along with Jean Perret, Luxor, Paul Buhré, Robert Cart, Terrasse, and Zodiac) was officially dissolved and integrated into Zenith. These brands were officially abandoned in 1989.

In 2002 the watch company Moser Schaffhausen AG was founded by Dr. Jürgen Lange and the great-grandson of Heinrich Moser, Roger Nicholas Balsiger, together with private investors, in Neuhausen near Schaffhausen. At that time, Dr. Lange registered the brand H. Moser & Cie. internationally. Dr. Lange had recently founded Precision Engineering AG (PEAG) with Thomas Straumann to produce Nivarox hairsprings (invented by Straumann's grandfather) and balance wheels independently. The new Moser brand would be entirely independent and vertically integrated, thanks to the partnership with PEAG, capable of producing the entire watch.

The first three H. Moser & Cie. watches premiered at BaselWorld in 2005, the 200th birthday of the fouder. These were the Monard, Monard Date, and Mayu. The exclusive new movements, developed with the help of watchmaker Andreas Strehler, contained many novelties A hardened escapement that needed no lubrication, a beryllium bronze “dragon-lever”, conical winding wheels, and the “double-click” crown for quickset date. Simple functions like this would become a hallmark of the brand, as would another Strehler innovation, a removable modular escapement.

H. Moser & Cie. watches are known for their clean and simple dials. For example, the Strehler-designed Perpetual 1 (introduced at Baselworld 2006) hides the perpetual calendar with a tiny arrow hand rather than apertures and subdials. In November, 2006 H. Moser & Cie. won one of the most prestigious prizes in the Swiss watch industry, the Best Complication prize at the Grand Prix d'Horlogerie de Genève, for the Perpetual 1. The Perpetual 1 also won the “Over € 25,000” category at the Goldene Unruh for 2010. The Perpetual 1 concept remains in production as the Endeavour Perpetual Calendar and is the brand's best-known product.

Moser also became known for sophisticated dial production techniques and the use of the precious metal, palladium. In 2007, Moser introduced their own hairspring, co-produced with PEAG, called the Straumann hairspring after the inventor of the Nivarox alloy. Another 2007 introduction was the tonneau-shaped Henry, a new look for Moser that failed to find sales success. However, it provided a platform for the Straumann double hairspring and laid the foundation for a much more important line, the 2017 Swiss Alp Watch.

H. Moser & Cie. was taken over by the Meylan family in 2012 becoming part of MELB Holding, with Edouard Meylan becoming the CEO on April 1, 2013. He reinvigorated the company with new products, innovative marketing approaches, and strong financial resources. The collection was reinvigorated to focus on eye-catching color dials, discrete complications, and everyday wearability. In 2013, the brand adopted the tag line “Very Rare”, reflecting their focus on limited production, in-house manufacturing, and ingenuity.

Among Meylan's signature accomplishments are the creation of watches that challenged the status quo of Swiss haute horology with humor and taste. His “Swiss Mad Watch” (with a case made of Swiss cheese) and “Swiss Icons Watch” (which mashed together numerous signature elements from other Swiss brands) were pure novelties, but the Swiss Alp Watch was a genuine and respected product offering Its shape reflected that of the Apple Watch but was an example of Swiss watchmaking at its best, using the tonneau-shaped in-house movement from the Henry and bringing signature elements like fume and “funky” dials. Over a production run of about 240 examples, the Swiss Alp line included many innovations and gained notoriety and respect for the brand.

After acquiring Precision Engineering AG in 2012, Moser became a truly-integrated manufacture, one of the few companies in the industry to produce hairsprings, escapements, balance wheels, and other components in-house. Seeing other companies abusing the “Swiss Made” label on watches containing a large amount of components sourced abroad (often in China), Meylan rejected the label altogether. H. Moser & Cie. watches removed “Swiss Made” from the dial in 2017 and Meylan lampooned the loopholes with the launch of the “Swiss Mad Watch”. The company claims that over 95% of their watch components are produced in Switzerland, a far higher standard than required by the label.