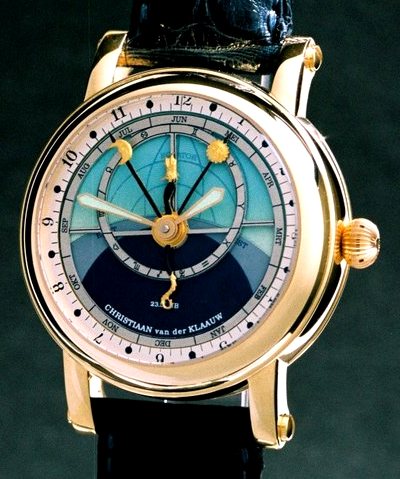 Christiaan van der Klaauw was born in Leiden in the Netherlands in 1944. He attended the School for Instrument Makers (LiS), which was established in 1901 to support “handymen, puzzle solvers and inventors” like van der Klaauw himself. He later studied clock making and moved to Joure in 1967 to work for a producer of grandfather clocks.

In 1974, van der Klaauw established his own company and produced his first clock. He opened his own atelier in Joure in 1978. From the start, he focused on astronomical complications, including his “Real Moon” in 1980, and these earned him a measure of fame and respect from the watchmaking industry. He was admitted to the AHCI in 1989 and remained active until 2014. The brand remains recognized as an independent maker of haute horology to this day. His 1992 Pendule Variable featured a rotating sun and moon track and astrolabe and won a gold medal in Basel.

van der Klaauw produced his first wristwatch in 1994, presenting a pair of Satellite du Monde watches at BASEL 95. Both feature his signature complication A track on the dial which shows the motion of the moon (synodic time) and sun against a list of world cities around the 12 hour dial. The sun can be used as a world time indication, along with day/night indicator. Klaauw used the simple ETA 2824-2 and Valjoux 7750 movements and focused on the design and finishing rather than the basic movement. Sales appear to have started in 1996, though very few were ever produced.

In 1997, van der Klaauw designed a pair of astrological watches for LaFleur Biancardi of Maui, Hawaii. Like his other pieces, these used the ETA 2824-2 but include Eastern and Western astrological signs rather than planets in the Star and Yin Yang, respectively. Some later Satellite du Monde Chronographs used a historic Venus Cal. 175 movement, and Klaauw also produced a smaller ladies model.

The 2001 Eclips 2001 uses a GUB Cal. 39-11 or ETA 2824-2 to support a full calendar and complex moon phase indicator. It was presented at Basel Fair in the AHCI booth. The 2002 Astrolabium features a full astrolabe, indicating the brightest stars, position of the sun and moon in the sky, and the lunar nodes.

Van der Klaauw worked closely with Jochen Benzinger to offer elaborately-decorated movements starting around 2001. These were called “Klaauw-Benzinger” or “KB” movements by the brand, reflecting the close cooperation between the brands, though they were based on common ETA movements, notably the ETA 2824-2 and Valjoux 7750. Most were modified with complications.

Christiaan van der Klaauw had known Dutch designer Daniël Reintjes since the 1990s and the two had collaborated on watches for his Dark Rush brand. In 2009, Reintjes took over the brand, along with Maurice Doppert and Maria Reintjes van Laar. Now known as Christiaan van der Klaauw Astronomical Watches, the brand focused on van der Klaauw's signature astronomical complications. In 2010, Thomas van der Kallen, formerly of Ebel, became President of the company. The company also adopted a sun symbol rather than the avian leg used previously.

One of the first products of the new company was the Retro Moon, with an arched track between 4 00 and 8 00 on the dial showing the phases of the moon, indicated by a pointer at 6 00. Another 2010 model was the Orion, but the 2011 Real Moon 1980 was the brand's new signature. Named after the 1980 astronomical clock, it featured the 3D moon globe at 6 00 and an indicator for the declination of the sun at 12 00.

van der Klaauw had created a table clock planetarium with planets raised on tiny rods in 2012, and this complication was brought to a wristwatch two years later at SIHH. In collaboration with Van Cleef & Arpels, the Midnight Planetarium caused a stir, gaining international press attention and becoming a finalist in the Calendar category at the GPHG in 2014. A smaller version was created in 2018, the Lady Arpels Planétarium. This watch won the Ladies' Complication Watch Prize at the Grand Prix d'Horlogerie de Genève in November, 2018.